I have been putting silk roving (or whatever it is called) into loosely curled shapes and then laying some water soluble fabric over the top. I copied the design onto the soluble fabric to assist me in the sewing, my freehand sewing is not that good. 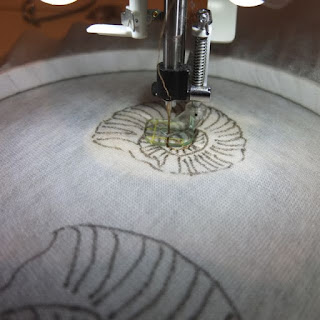 I tried some in a hoop. At first I didn't put the soluble fabric from side to side but that wasn't entirely successful, I needed pins to hold it in place.  So then I did two at once in the hoop. 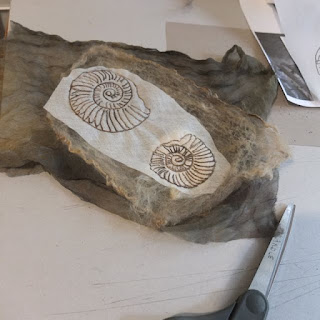 I cut the extra soluble fabric away before washing it as I didn't want the piece to be too stiff. The soluble is relatively difficult to get rid of entirely and does change the hand of the fabric. 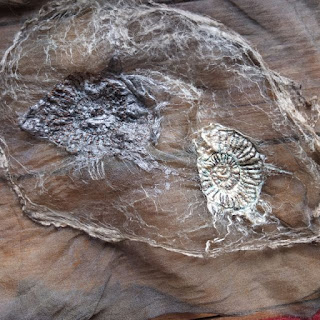 Here it is dried out. I used chiffon for the background piece, then a layer of silk hankie (not an actual handkerchief. I think it is a cocoon pulled out into a flat piece that has many layers and then you can peel those layers apart for really thin pieces of silk). 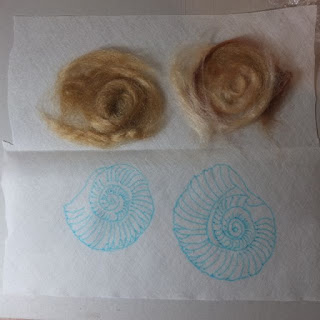 Then I decided not to use any background fabric. I just laid out the silk roving and put it between two layers of soluble fabric. It might have been easier to use the see-through soluble but I don't have any and I do have a reasonable amount of the other. I am still trying to use up my stash. 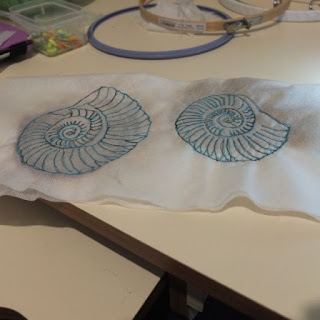 I was going to try to sew one without the soluble fabric as it does get flattened and stiffer but the thought of all that loose silk under the needle seemed too challenging. So that experiment can wait for another day - or another life. 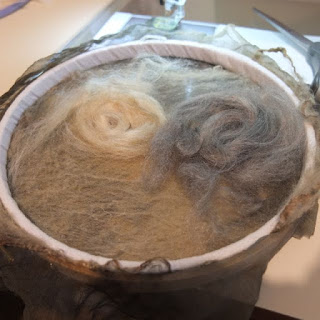 Anyway, they are coming along. I just have to work out how to attach them to a background. And make the background first!

It has been enjoyable playing with the ideas. Also, because they are all separate pieces, they can easily be discarded, or used differently, if they don't work out properly.
Posted by Mary at 31.7.16 2 comments:

I Wonder What Would Happen ...

I am trying to come up with a design that has some connection to fossils.
We have a fossil lying around in the house, of which I have taken photos. 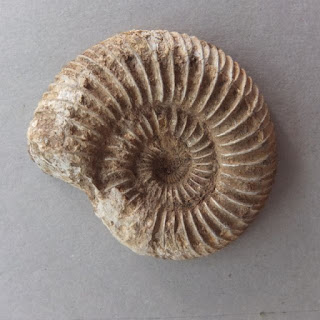 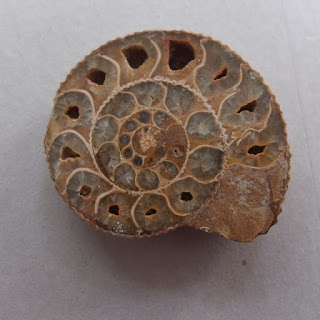 I have LOTS of silk, scrim and other bits and pieces that I have dyed, mostly using eucalyptus leaves and bark.

I played around with this idea, a little bit, a few weeks ago, for one of our machine embroidery group meetings at the Embroiderers Guild of Victoria.

I made one piece too big for the task. It has been hanging around on my pinboard, looking interesting but not particularly useful.

Then I thought … I wonder what would happen if I did several of these. Can I layer them to look like layers of fossils.

After playing around with the idea, I keep changing how I am doing it.  The changes are not huge, just trying to work out a better way to make the bits.

I made a couple more pieces similar to the first one - of course I couldn't find any more scrim that colour. So now the pieces are of varying colours.

How you see things

I was outside the other night and the moon was peeking out between the clouds. It was also behind the gum tree that is next door.
I thought I would try to take a picture but, by the time I got the camera ready, the moon had almost disappeared.
I took the photo anyway. 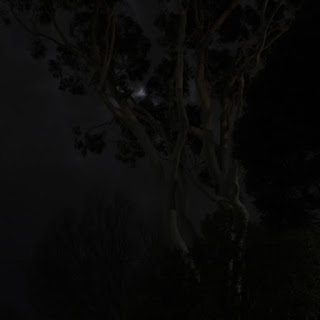 Today I decided to put the photos from my camera on my computer. I wondered what on earth I had tried to photograph. What was this black image?

When I looked closely, I thought I could see the vague outline of a horse's face.

Then I used 'enhance' in iPhoto and it was an amazing difference. No horse's face in sight.
How amazing is 'enhance'?? 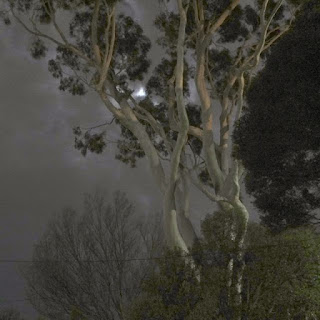 Exciting news: As I have mentioned before, my work was accepted for A Matter of Time. Brenda Gael Smith, the curator, has done an excellent job of getting the exhibition mentioned in several magazines and my piece was included in the images chosen. You can see the articles in Textile Fibre Forum magazine (edition #122 2016), Quilters Companion (no 80) and in the upcoming Down Under Textiles (issue 25, 2016).

I was also interviewed and photographed for the In the Studio feature of Quilter Companion. That was an incentive to actually tidy the studio, and to put some artwork up on the walls that have been bare for a while, since we had some renovations done. 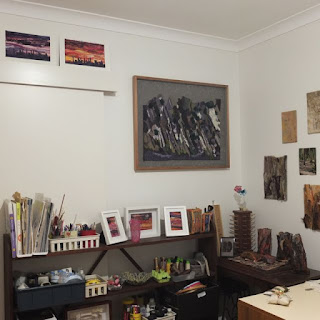 It was great to see the pictures (obviously taken with a wide-angle lens!) and remember those brief few days when the studio was tidy.

It is not tidy at the moment, I have lots of my tapestry paraphernalia lying around. I started an image a while ago but it just isn't working. So, a couple of days ago, I warped up the slightly smaller loom and started again.
I had done quite a bit of it, persevering despite the difficulties. But now it is put aside and I am using my smaller loom. I might be able to use it for a sewing exercise, maybe distress it or something. Seems only fair, it has been distressing me.

Hopefully I have learnt from the mistakes of the previous piece and I won't make the same errors - or any.

As my friend has just reminded me, a successful piece depends on good preparation. I don't think I did that properly and now I am sorry.
Still, the new piece is coming along and I am putting in quite a few hours every day, improving my weaving. I don't do weaving all that often, so it is good to be being consistently sitting down and doing it.

But I do have a couple of ideas for art quilts that are still rattling around in my head - I really want to get to them. Must have some discipline and get the weaving done first.
Posted by Mary at 16.7.16 No comments:

I recently noticed a brochure from our local council, Banyule, about weeds in the area.
I was quite surprised to see (on page 10) that Monterey Pines are regarded as environmental weeds.
Several of the parks I walk in have them and it is lovely to walk under them. It is so quiet. And the stands of trees are not big, so that you are through that bit fairly quickly.

I also noticed that they provide food for the cockatoos. I have noticed black cockatoos, white cockatoos in them. And there was a very tame flock of Corellas there a few days ago. They let us walk very close to them and they barely looked at us, dog included.

The brochure is basically telling us to pull them out if we see them sprouting, not to get rid of the big ones. Thank goodness.
Posted by Mary at 10.7.16 No comments: