We had our monthly meeting for our tapestry weaving group today. It was a smaller than usual gathering but still very interesting.
Cresside brought along the four tapestries she has recently completed as a community tapestry effort for Manningham Council.  It was done in conjunction with her exhibition.

It was great to see the four together. They were designed to be worked from the art gallery as you look out the windows, at the actual view. It is linked to Cresside's en plain air tapestry weaving technique and is beautiful.

At least one member of our group helped with the community tapestry but it was mainly people from Manningham who participated. Cresside said that some of the people had no experience at all with weaving but still did a good job with their contributions.
Congragulations Cresside.

She kindly allowed me to take some photos. 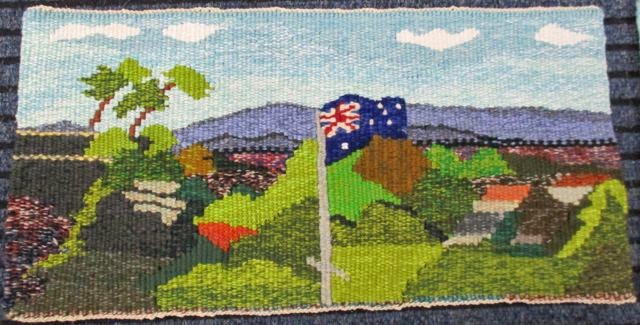 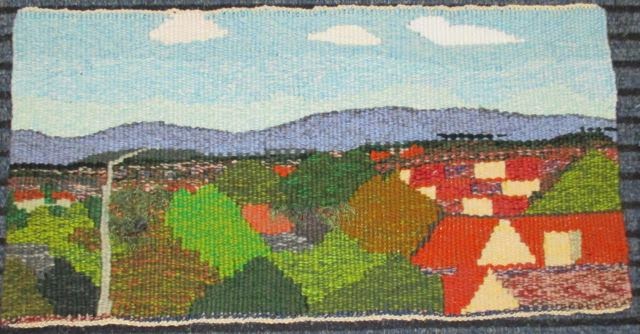 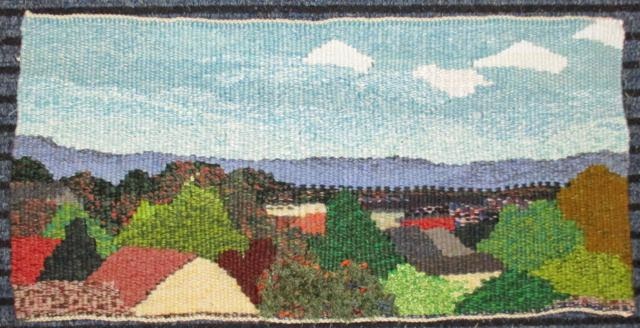 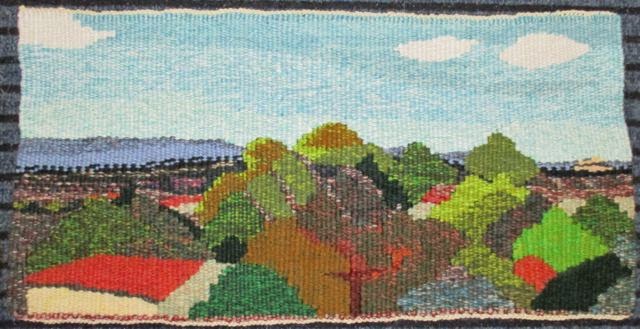 A little while ago, I visited a friend in Kyneton and we went along to the Lost Trades show. It was much bigger than last year's event!  Many more people and lots more stalls.

We saw some of the same stalls as last year
but there were new artisans there also. 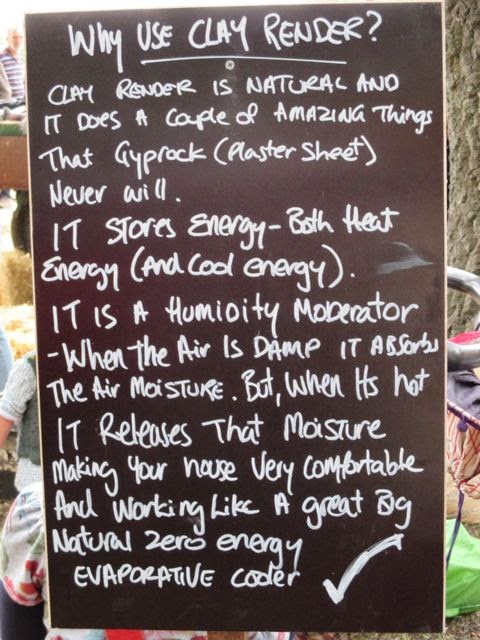 There was lots more to see, this was just a sample of the various lost trades being demonstrated.
You could see scythes, fishing rods, spinning, weaving, millinery, etc.

One interesting stall had printmaking.  I took a card and found this very interesting video about how she has made a print of a kookaburra.  It sounds like an interesting project she is doing - making a Children's Bird Book. I will have to follow her on Facebook (tremble, I am not a Facebook person!) and see how it develops.
Posted by Mary at 27.3.15 No comments:

I have been doing my homework for my course, and playing around with ideas with a few friends, but nothing much is inspiring me at the moment. Maybe it's the changing seasons - I always blame the weather.

But here is something I have been doing:
My friends and I got together to do some mono printing. I had looked it up and saw one article about finger painting style.  Reverting back to teaching young children crops up often in my work, I am discovering.

Our design task after one class was to use analogous colours, with one opposite colour, and a leaf motif. As usual, I got a lot of ideas while taking Penny for walks.  I noticed quite a lot of green leaves (no surprise there) and that there is often a red element to the plants.  So I dutifully took photos.

I decided to combine our play day with the leaf and colour task and came up with a few pieces of fabric.  I used white fabric first, then green, as it is sort of analogous to the green fabric paint I was using. 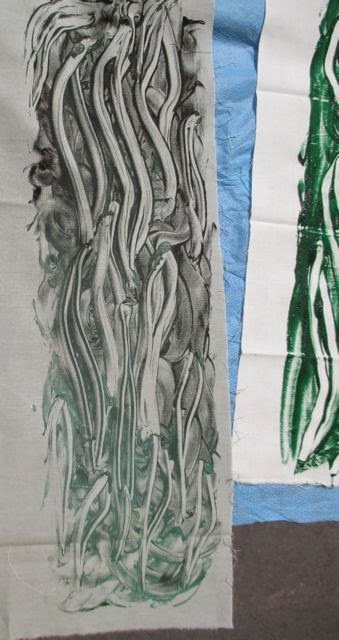 We also had to vary the colour from dark to light, so I put in some black at one end and white at the other. It meant I lost the original colour but I didn't worry about that too much.

Then I decided to use some actual leaves and put the fabric paint over them, then brayer the fabric over the top.  This turned out quite well. 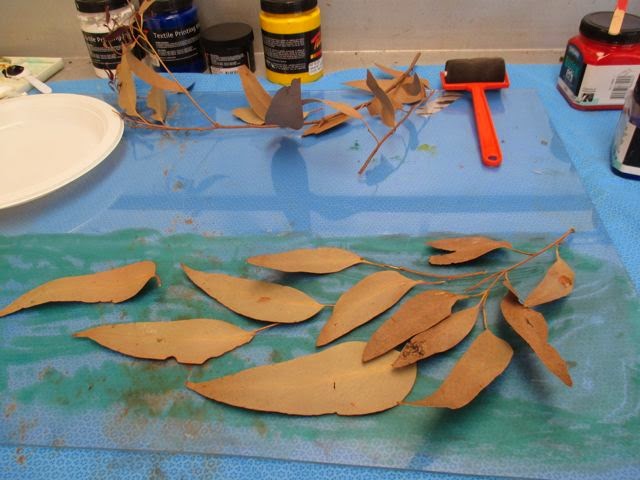 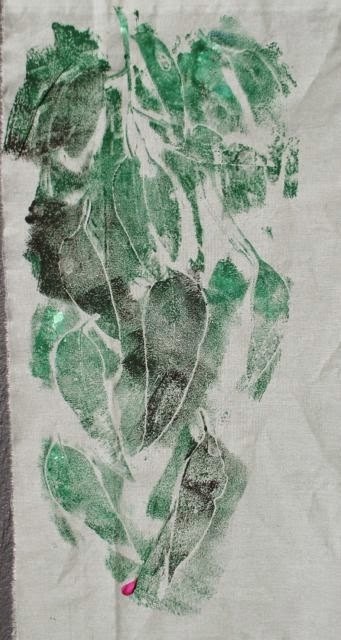 I haven't done much with them yet, apart from using an old lino cut piece to put the contrasting colour on. I will try some free motion quilting later, if I get around to it. I don't think it is a particularly successful piece but it was interesting to do and has opened my eyes to some possibilities. 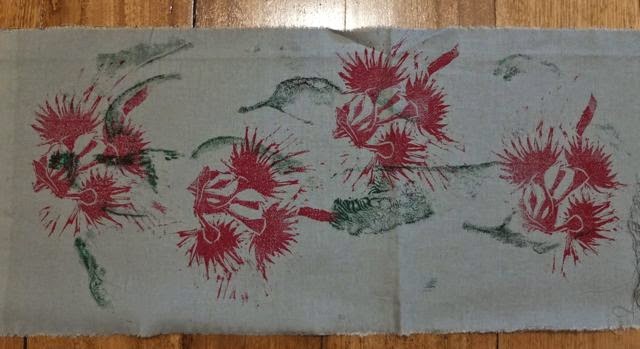 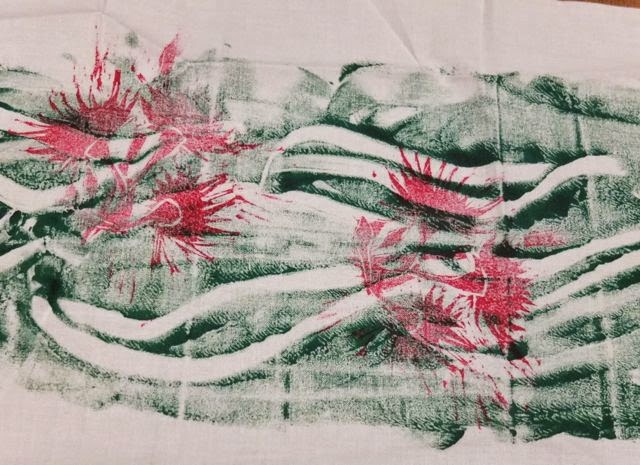 Once again, I have returned to one of the activities I used to love doing with my school teaching. It was a fine motor skill activity, paper weaving.

I did a very rough one first, just to see if I remembered all the steps correctly. Not that there are many steps.
It was lucky I did though, as I had tried to do the two pieces of paper the same, by not cutting right through to the edges of the paper. That didn't work!  So I maintained one piece with intact edges and then cut the other piece into strips. 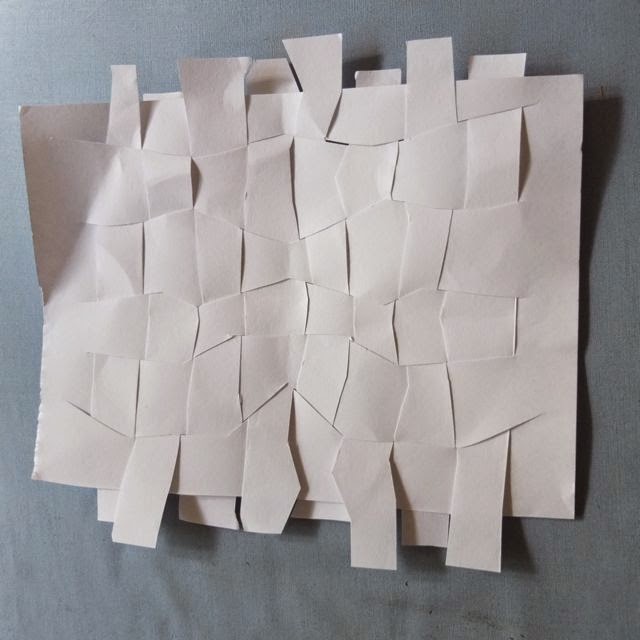 Then I chose two random bits of fabric that I had lying around.  I decided my day needed brightening up, so I chose loud ones.

I ironed on some fusible stabiliser first, then folded the orange piece and cut from the middle, doing random cuts - not trying to do straight lines at all. 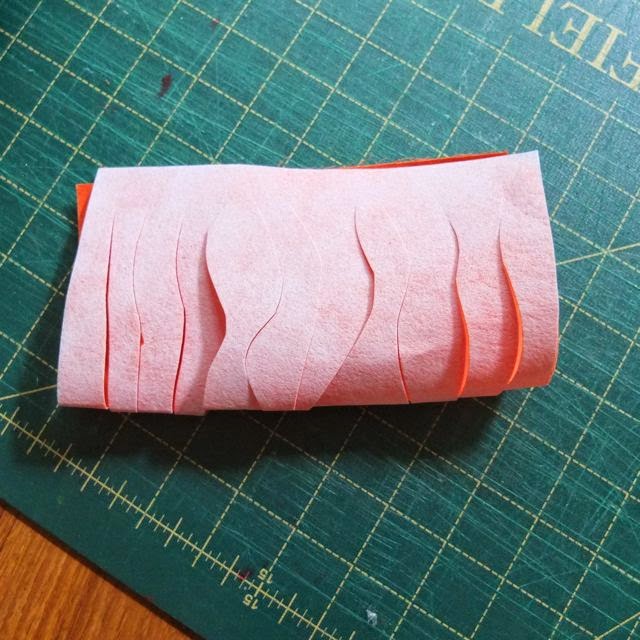 Then I cut the strips from the purple piece, once again doing random, unplanned cuts. The two pieces of fabric were not exactly the same size. I had thought about cutting them the same before starting but decided that it wouldn't hurt to have some left over in case I thought of something clever to do with it. 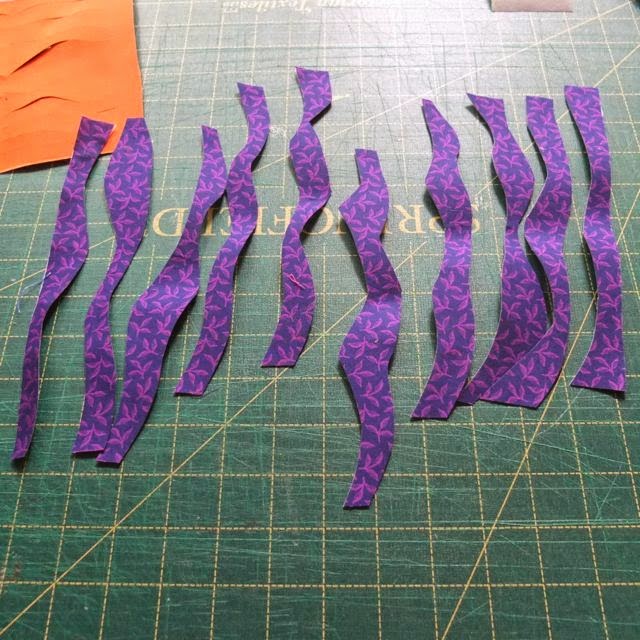 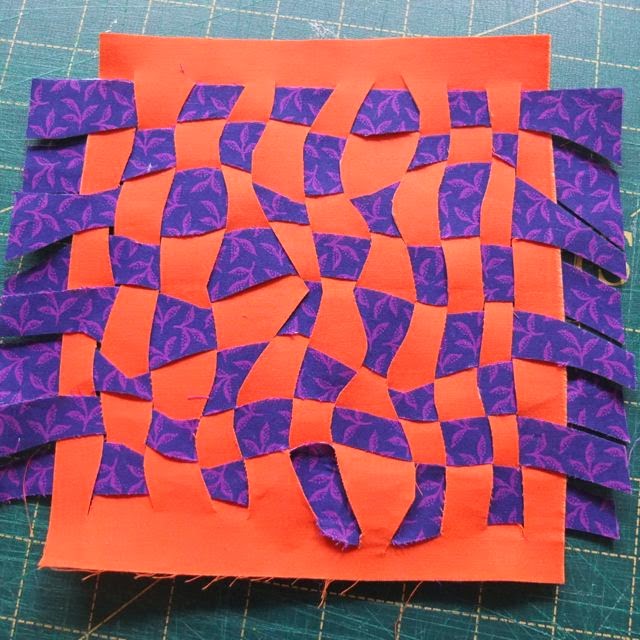 So far, no clever ideas.  I suppose it could be used as a background for more work. I'd probably have to use more muted colours for a background - depending on what I wanted to do.

Actually, it reminds me a bit of some of the Zen Doodling and Zentangle stuff that I have been browsing (here and here) on the internet recently. (I have resumed doing a daily small one in the last few weeks and find myself colouring in alternate blocks, a bit like the colours above do.)

Our homework brief is to do some 'weaving' using fabric and to try to play around with the idea, not do anything textile predictable. I'm not sure this is all that different but it is the start of me giving it some thought.
Posted by Mary at 19.3.15 2 comments:

The problem with a poor memory

I got a lovely surprise today - and a terrible feeling because of it. 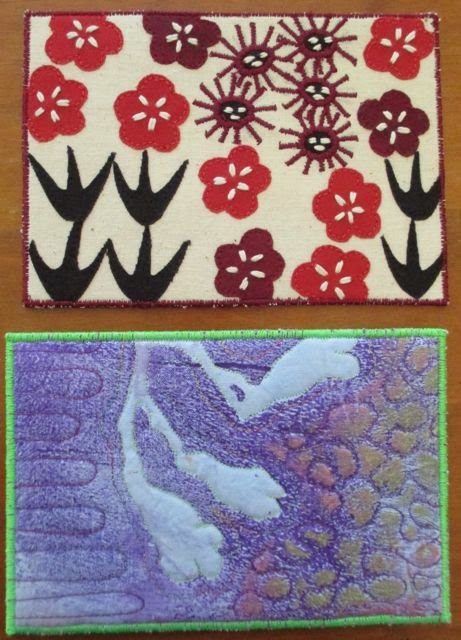 They were out of the blue as far as I was concerned, I had no recollection of joining a swap - but they came in envelopes with my handwriting on them. Panic set in; I haven't got my machine, I feel devoid of inspiration and I was not happy to think that I was letting someone down by not doing my part. How could I possibly do a good one in time?

Fortunately, the cards came with details of the makers and I was able to ring one of them and ask her why she had made the postcard (after thanking her for her lovely work).

It turns out I (and she) had participated in the Embellish magazine postcard swap. I had completely forgotten about it!  What a relief, I had made two cards and sent them off. Now to see if I can be creative again, once I get over the shock.
Posted by Mary at 11.3.15 2 comments: