Today was the opening of the Buda Contemporary Textile Award and Exhibition. A friend and I ventured up to Castlemaine for a lovely afternoon.
The exhibition was opened by Lesley Uren, who spoke passionately about embroidery and textile art.

It was well worth the visit. The works were quite diverse and all were interesting. 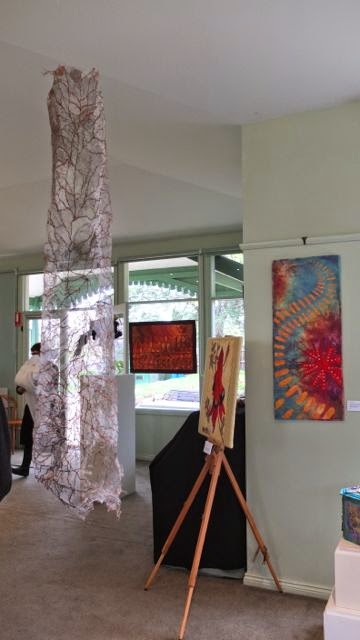 There were several works by students and we were encouraged to venture into town to see further school student work on display in participating shops. Unfortunately, we didn't have time today but I will be back there to sit in the gallery, so I hope to get to see them then.
It was great to see work by people I have met or whom I have come across through the internet. I felt like I knew some of the artists, even though I have never met them. The wonders of the modern age.

I was very pleased to see my two parasols beautifully displayed. Congratulations to the curator and her team.

I am still working on ideas for teaching handwriting, trying to make it interesting - for the student and for me!

I am still not confident of my drawing skills so have been using some outlines from 123RF. I found a couple I liked and have filled them in with doodles.


I have been trying out various patterns that might suit the correct letter formation. Because we are doing letters with similar formations, I am finding that the patterns are getting rather repetitive. 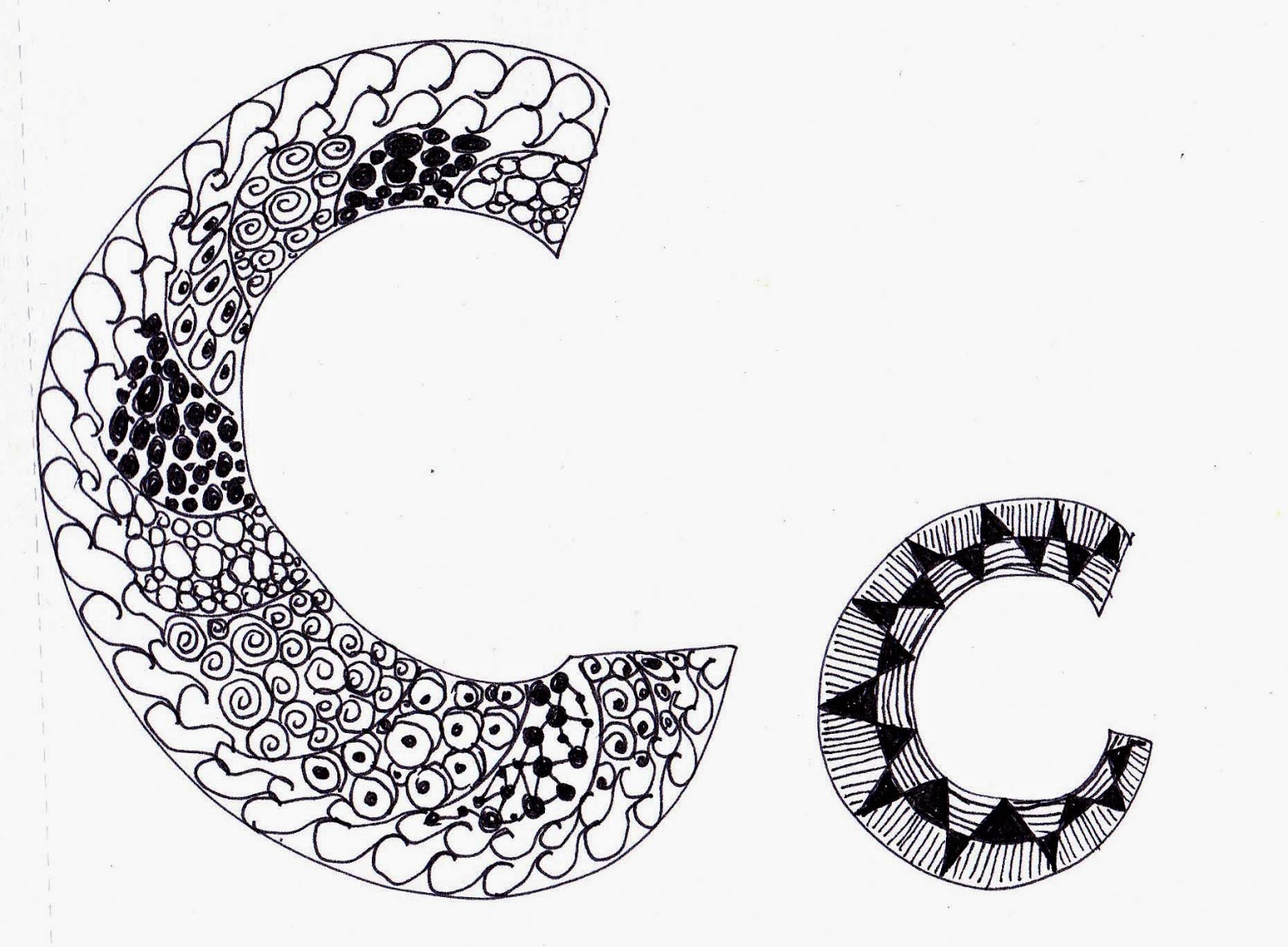 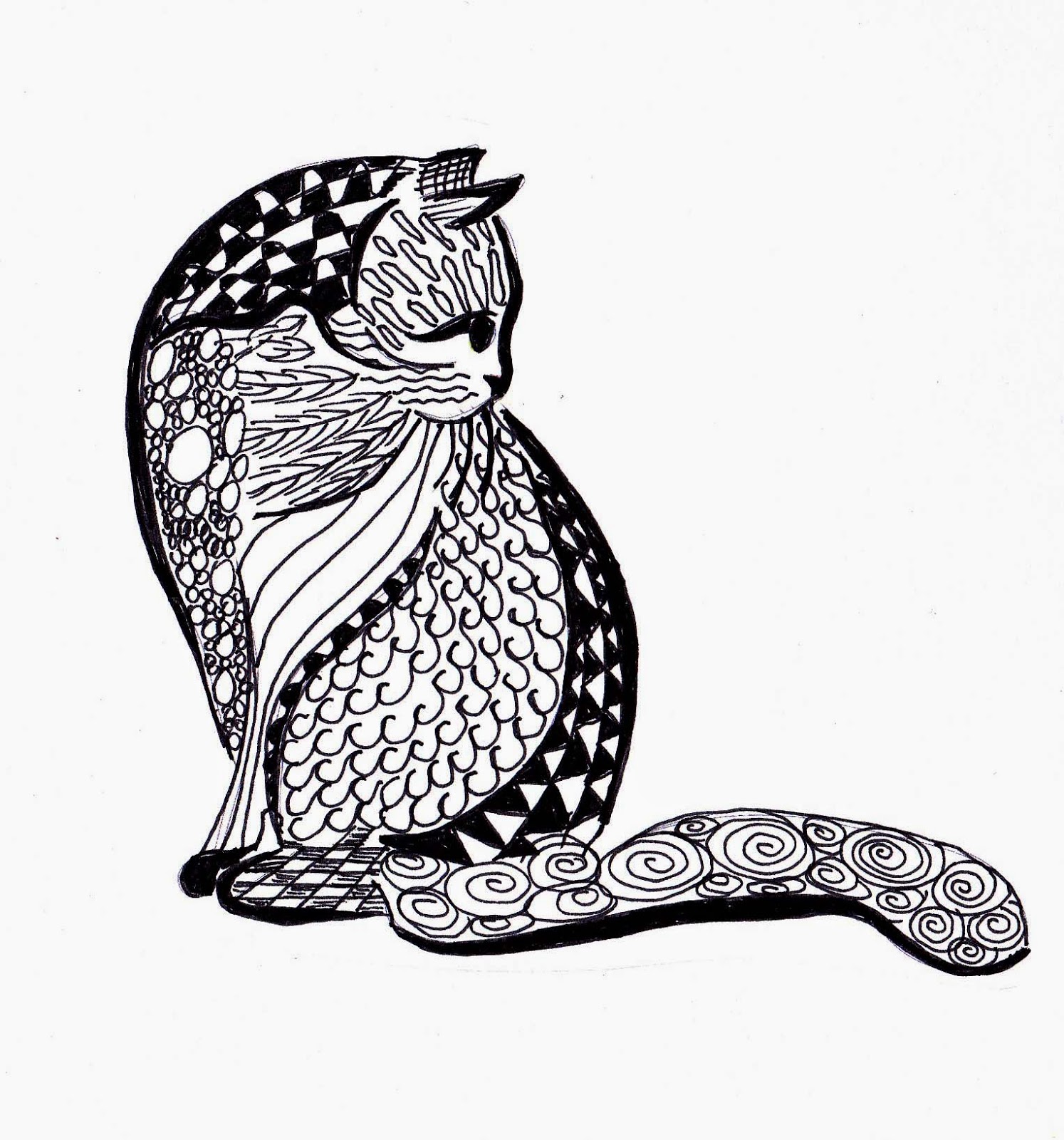 I had forgotten that I had done the letter D hidden amongst the doodles, I will try to make a few to go with the letters I am now doing to make a little alphabet book.

A letter a day doesn't take long, very restful to do just before sleep.
Posted by Mary at 26.5.14 No comments:

Trying to make a bag

I attended a workshop at the Embroiderers Guild recently. It was to make a handbag - one that has inside pockets, one of them with a zip closure, an outside pocket (two if you wanted), a zip closure and that will hold A4 folders.
The class was run by one of the members who has experience in the tailoring industry. This meant that she used terms that meant something to her but nothing to me - context and prior knowledge being so important (my teaching of reading coming in here). She was also very strict about being accurate!

The class took two days, a week apart with plenty of homework to do in between. I had to ring her to check some details but successfully made myself a bag. Not that I finished it in the two days, I had to do more once I got home. Unusually for me, I actually went on with the work after the classes. I was determined that this was not going to be yet another UFO.

Having done plenty of quilting classes where you learn a technique while making a block, then go home and make another block by yourself, I realised that this is a very good idea and I should make another bag while it was still fresh(ish) in my mind.
In the meantime, I have attended two other quite demanding workshops that I played around with afterwards also. Therefore it is quite a while since I made the bag.

The teacher has gone overseas, so I couldn't ring her this time! No safety blanket for me.

It took me several days, longer than I had hoped, partly because the sewing machine stopped working and had to go for a service.

One part of the instructions said to do it as the teacher shows us - and she's overseas!!!  And I can't remember what she showed us.  After sewing and unpicking one section FOUR TIMES, I finally gave up in disgust and went to bed.  Just as I got to the bedroom I had the thought that I knew how to do it - but I was strong and didn't go back to try again, I left it till I had had a good night's sleep - and got over my frustration.

I really should try again, see if I can make it in a reasonable amount of time but I can't see myself doing it in the near future.  I had so much trouble with a couple of aspects that I am pretty sure I will remember how to do it properly next time.  I hope so anyway.

I have been working with a student on her handwriting lately.  How to make this interesting???
Then a brainwave - I used to love doing the fluency patterns (not sure how the kids in my grade liked them, but I loved them).
So I had a play around with that.

Then I realised that some of the patterns had a remarkable resemblance to doodle and Zentangle patterns.
I still try to do a pattern every night before I go to sleep. 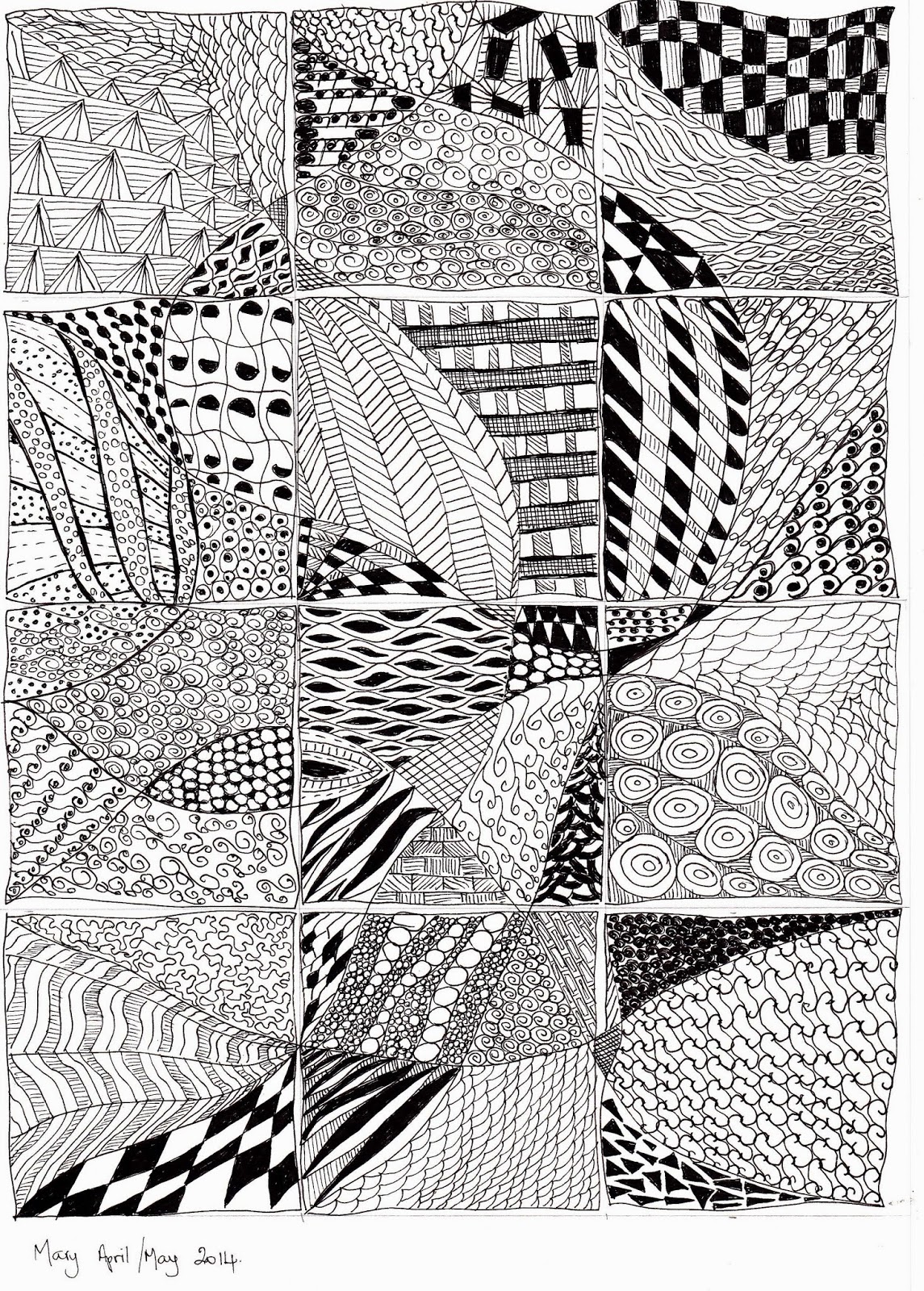 Recently I have been trying to do patterns that have the direction and shape that is used for the letters a, c, d, g and q. They all start the same way.

Then I had the brilliant (I thought) idea of making an alphabet for the youngest member of the family (trying to make the exercise meaningful) and that developed into D for Dog.
So I got a picture of our dog, 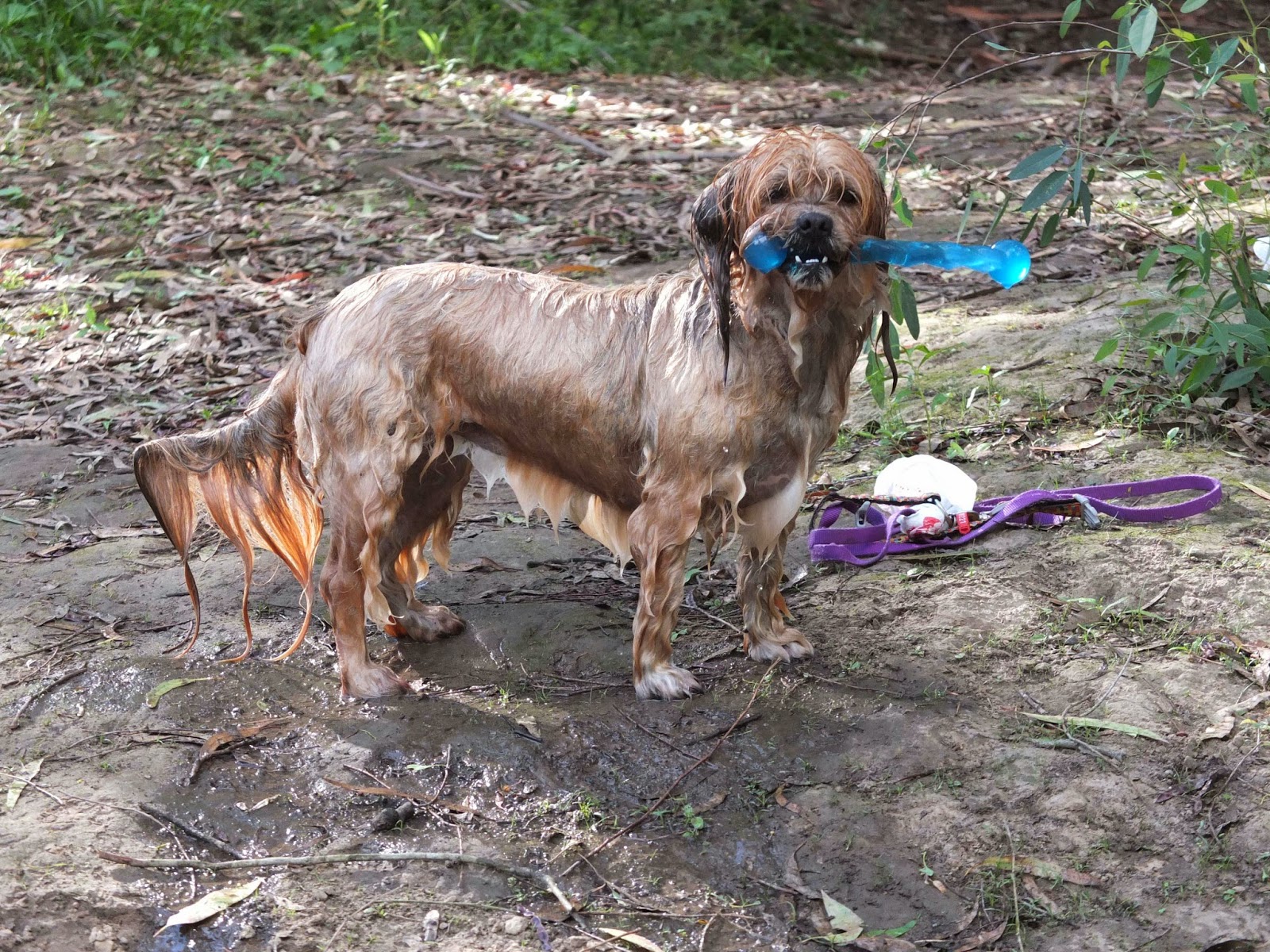 put it in Photoshop, traced it (because I don't think I can draw - common story), hid the original image, printed out the outline 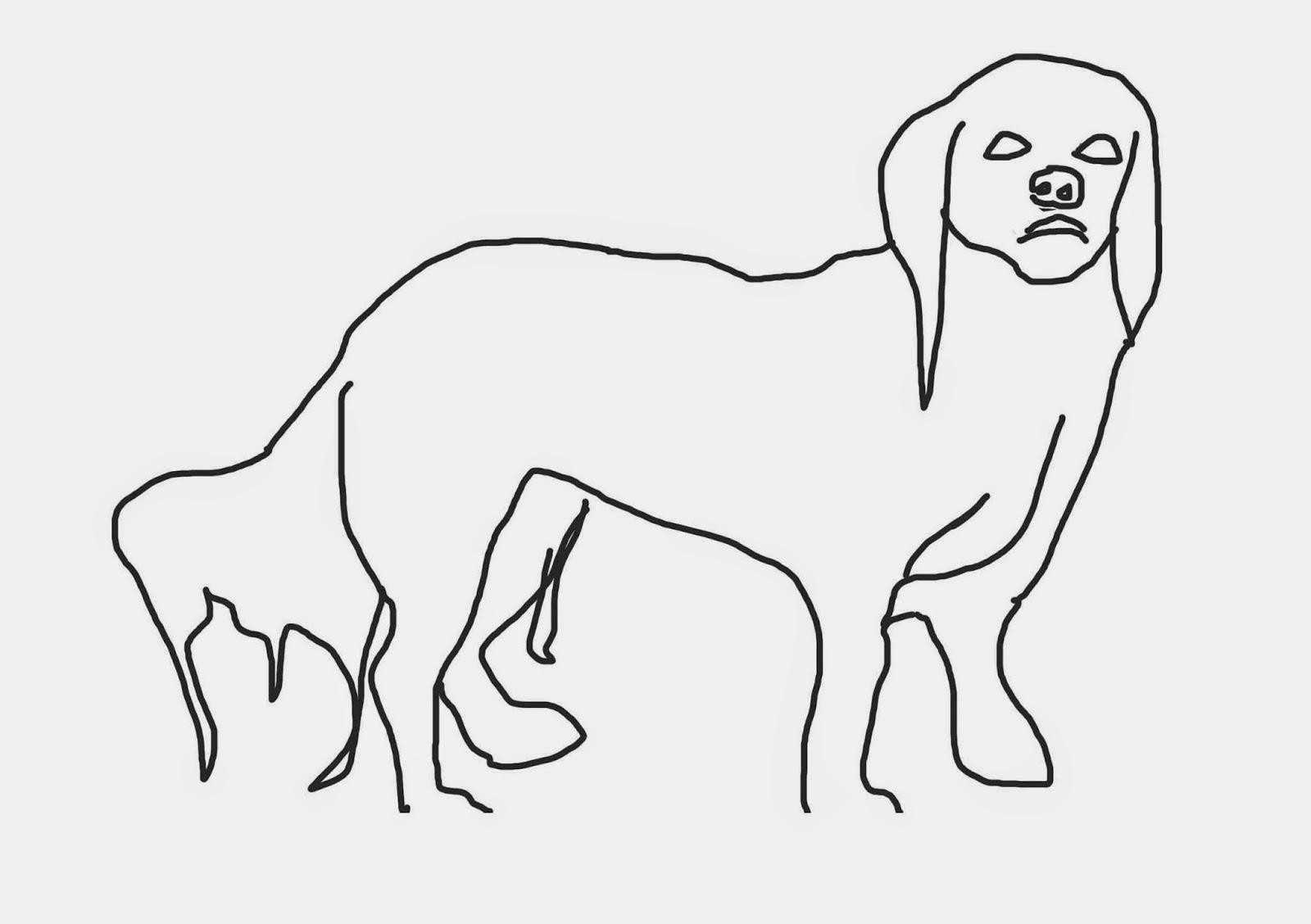 and then filled it in with patterns. 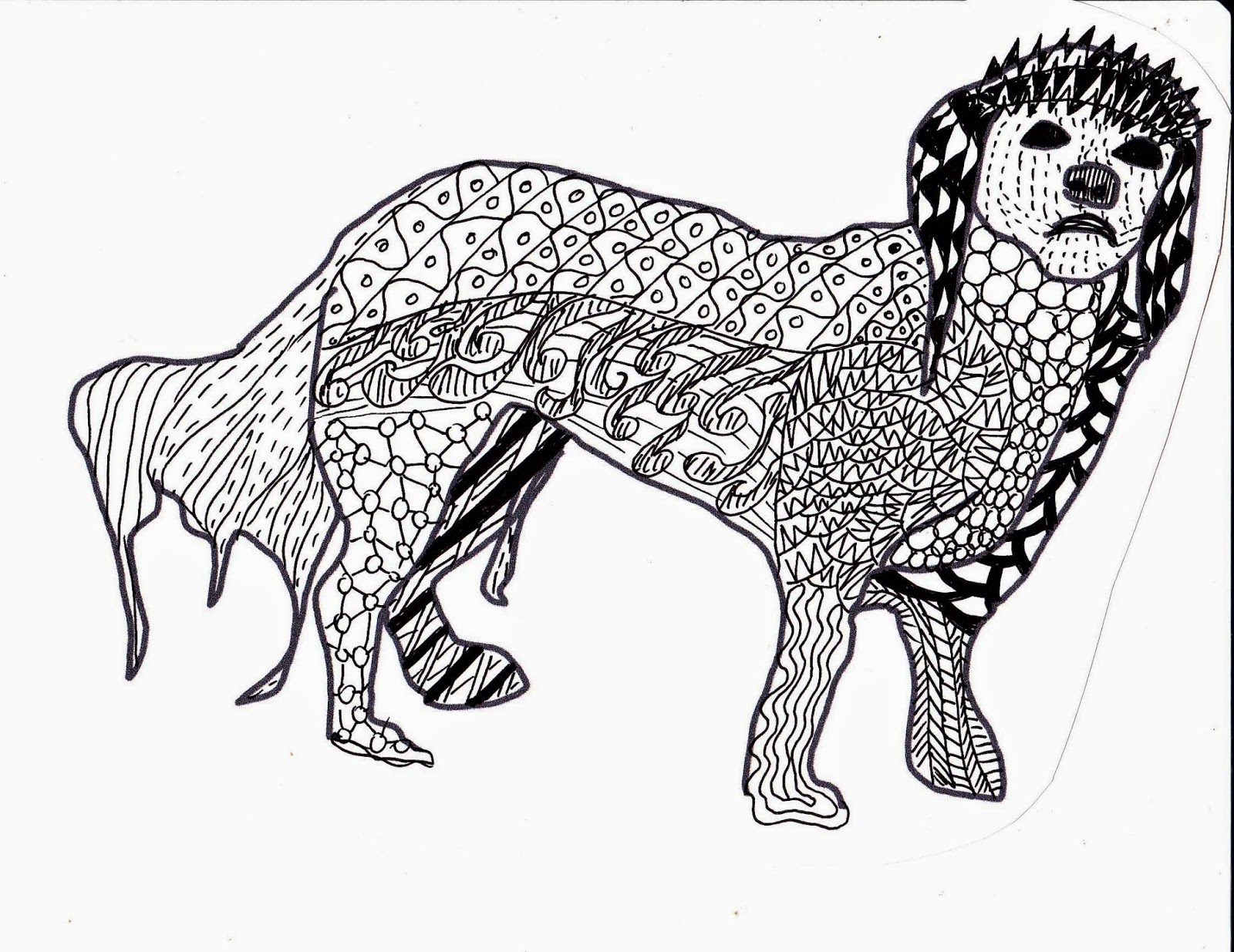 I decided that I didn't need to do all c-based patterns, I could include some straight lines, as that is something that so many children who are not taught hand-writing properly are not taught - to come DOWN first.
Now I am playing around with different patterns instead of my usual doodling.

Somewhere in all of this we are also playing around with alliteration, trying to make our own tongue twisters.  Sometimes I miss the fun things you could do with rather mundane-seeming learning tasks.
Posted by Mary at 14.5.14 7 comments:

What a time not to have the camera!

Well, my weekly posts haven't been happening. So here is a random lot of pictures.  It is all inspired by taking the dog for a walk late this afternoon.
We went to Warringal and the river flats had rising mist - or fog.  I'm not sure of the difference really. It was gorgeous.
The pictures aren't wonderful as I didn't take my camera and my old phone only takes simple, non-adjustable pictures. I couldn't resist trying to get the atmosphere anyway. 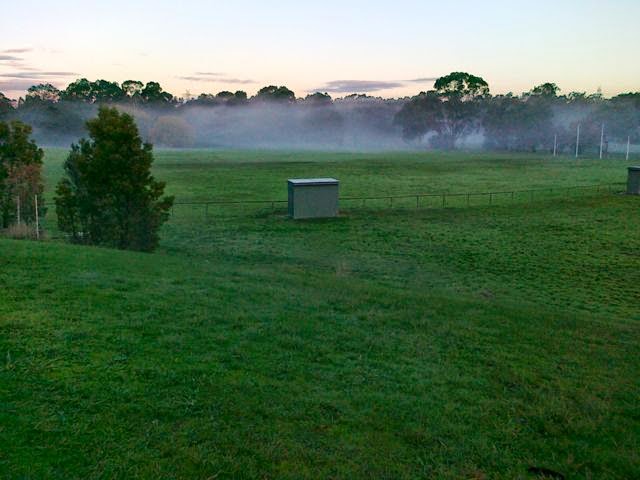 The best parts were on the footy ovals. One had obviously had a game played on it but I don't know if the players had had to contend with the limited visibility, we were a bit too late.
Another oval had a dad and his son practising, they emerged out of the gloom as we approached. 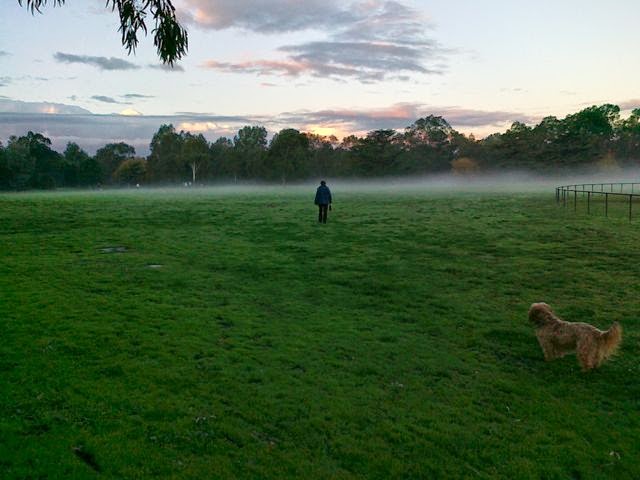 It was coming up to sunset and I got to see the colourful clouds, the moon and the mist - all at once. 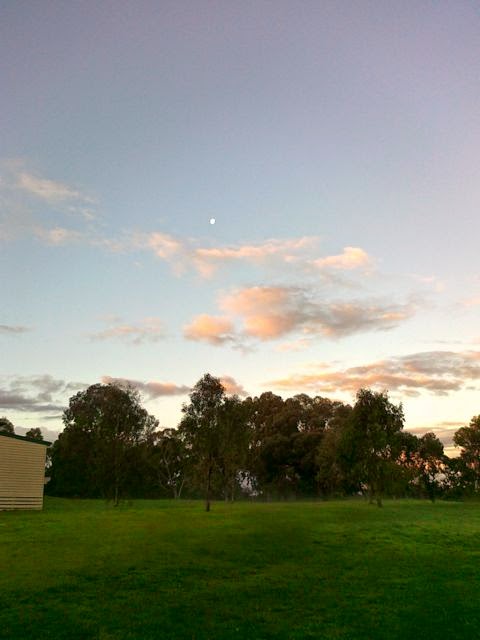 The unusual thing was that the mist didn't rise very far, the treetops stood out above the it.
Of course, it grew higher as it got later and colder. Not that it got very cold, it is still only autumn. 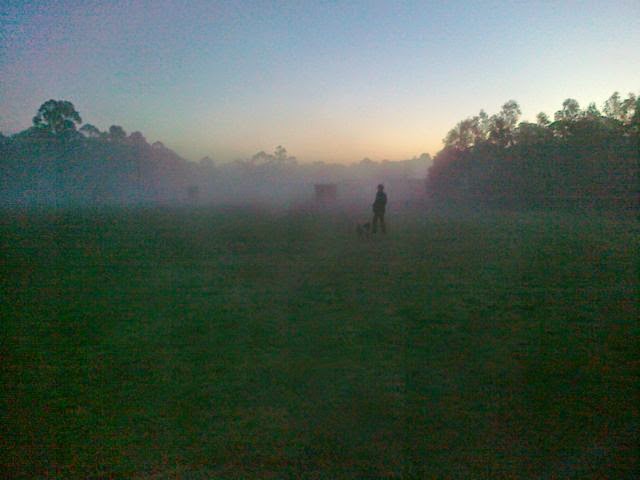 When I uploaded the photos from my phone, I discovered that I had several from past walks that I hadn't transferred to the computer. Here is a gorgeous pattern in the stump of a tree. I took it on another walk with the dog. Thank goodness we have her. She makes us go out and then we get to see the sights while she sniffs the smells. 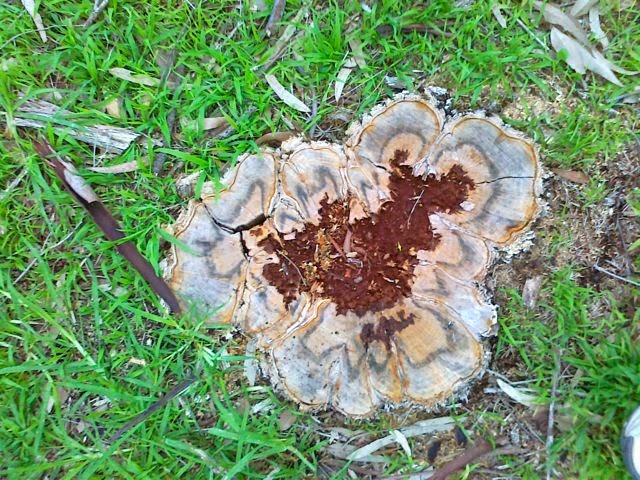