Finishing off - not my favourite thing!

However, I need to put the hanging sleeve on the back of my banner quilt. I took it with me the other day when I was getting together with a couple of friends - and managed to sew it closed.
Note to self: pull the slack up before pinning. 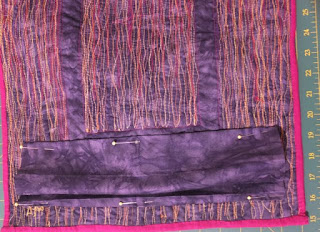 Then I forgot to take it to my tapestry group meeting today. I haven't got a tapestry on the go at the moment, so thought I would do that instead. I remembered the pins, scissors, thread, etc. But when I went to start, no quilt!

Hopefully, it will get done tonight.

I also have a machine embroidered piece that needs to be mounted. I probably wouldn't have worried about it except that I am going to put it in the Ebb and Flow exhibition at the Embroiderers Guild, Victoria. So it needs to be framed. 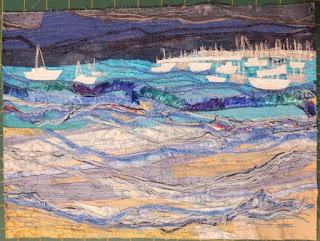 I haven't done any of my own framing since Frame Co moved to Carrum Downs - not close to me! Yesterday I took the opportunity of a relatively free afternoon to go down there. They were most helpful, giving me advice on different ways to mount it, what frames would look good, how to put in spacers to hold the glass away from the textured surface, etc.
Now all I have to do is remember how to put the frame together, use the spacers and mount the embroidery properly. Something for another day, not too far in the future.

Then I can give my attention to the next project - of which there are several. One immediate necessity is to tidy the studio again.
Posted by Mary at 26.8.17 No comments:

Just trying to do the last thing

I have done my sewing for the quilt top and just have to put on a hanging sleeve. Do you think I can be bothered??
It is always the way when you do the creating, the bothersome finishing off is so much less interesting!

I know I have a very good pattern for making the sleeve. I also know how to do it without the pattern. But I just can't bring myself to do it until I have found the pattern, which isn't anywhere I can think of to look.

Make myself just DO IT, as the famous football coach said. (John Kennedy?)

However ... I have also looked at the image of the piece with a border and noticed it has a major fault! No wonder it was in the UFO drawer.

The upcoming exhibition at the Embroiderers Guild is Ebb and Flow, so I can pretend that the skewif rectangle in the centre is ebbing and/or flowing. Or something.

I THINK I will put it in the exhibition, but I may change my mind.

I'm still deciding which way up is better. I thought I knew, then I saw the distortion, so that will have an impact.

The Embroiderers Guild, Victoria, is having a members' exhibition in October.
I thought I would try to come up with something for it. We are allowed to put in three pieces, plus another for the challenge.
The challenge theme is Take a Shell ...  I am not to sure about this one, might have a go, closer to the time. But, so far, it is not speaking to me. I did try something a while ago but am not that thrilled with it.

However, Ebb and Flow is the theme for the main exhibition.
I have looked at Pinterest (what a wonderful site!!) and seen all sorts of images that have inspired me. But I have come back to a piece that I started for the Living Colour theme, in 2014/15. I didn't finish it but didn't throw it out either.

I have resurrected it, in light of some of the ideas I have found online, and have spent quite a few hours refining the idea.
It started off as a simple patchwork piece, using the colour illusion idea that I tried before.

Now I have sewn it a lot! The idea is that the colour awareness ebbs and flows as we look at it. Or something like that.
I have added some random pieces of fabric, on top of the patchwork. Then I have heavily sewn it free motion.

I have finished the sewing, now I have to carefully measure and cut it, so I can put on some binding. That is for another day. Not far in the future though, I want to have it done and dusted.

I still have to decide which way up looks better. It is currently hanging on a bookshelf so I can see it as I pass by, then I will put it the other way up and see which appeals to me more.
Posted by Mary at 11.8.17 No comments:

Another day, another gallery opening

Last night the Hatch Gallery, in Banyule, had its opening of the exhibition, States of Being, the Elemental Importance of Water.
It is a lovely space and has amazing exhibitions.
Last night's was very well attended with a lot of commitment to the problem of water in Australia - we are a very dry continent, liable to the largest extremes of weather of any continent.

Works were from various visual arts techniques and were inspiring. 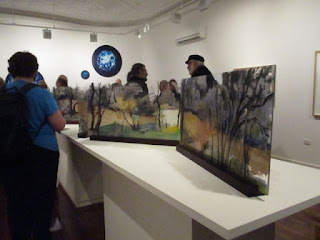 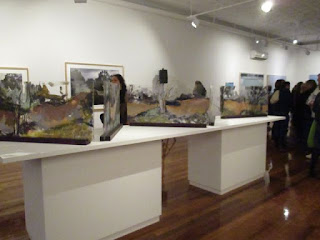 Of course, my favourites were the tapestries. 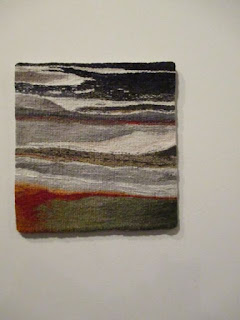 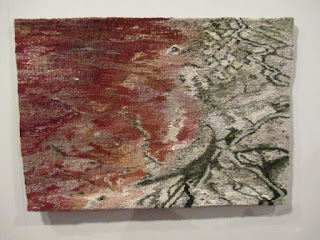 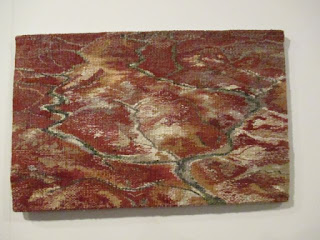 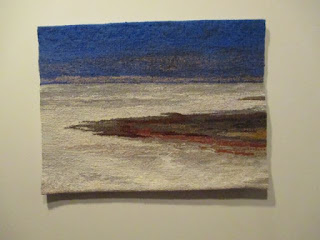 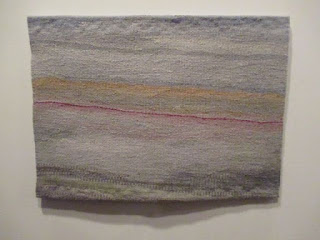 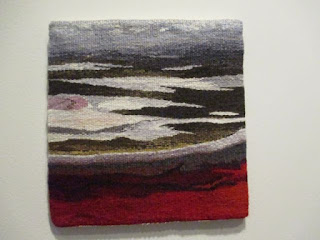 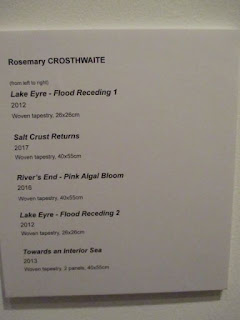 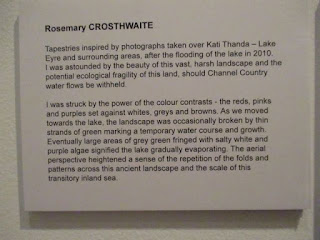 Rosemary Crossthwaite had a selection of 6 tapestries, all depicting aspects of water in the centre of Australia, notably, Lake Eyre. They were wonderful.

Due to the large crowd, I will have to go again to see all the works properly. But, not to worry, the exhibition is on until September 9th.

I was fortunate to be able to attend the announcement of the Kate Derum Tapestry Weaving Award, and the Irene Davis Emerging Artist Award tonight, at the Australian Tapestry Workshop.
The exhibition was of a very high quality. It seems to get better every time! 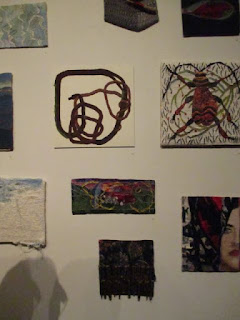 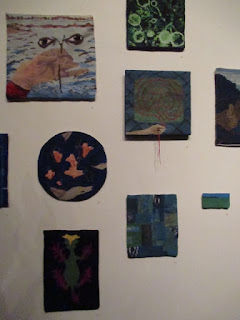 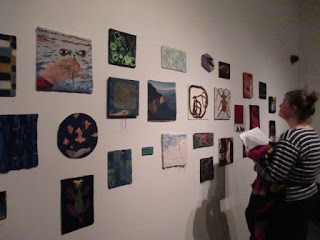 The range of tapestries was wonderful, as were the interpretations of the guidelines. Congratulations to anyone who did get their work in the exhibition, there were more applications than were shown.


It was also great to see some tapestries of people I have only come across online. It is soo much better to see the works 'in the flesh' than as images online.


The opening speeches were interesting. One thing I found quite fascinating was the idea that works from the USA, Europe and Australia/New Zealand have different features that identify where they were woven or where the weaver was taught. This was apparent to the judges, not to me!! 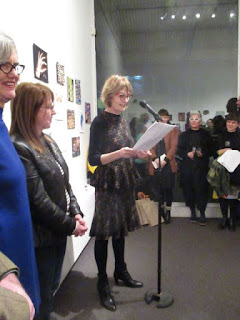 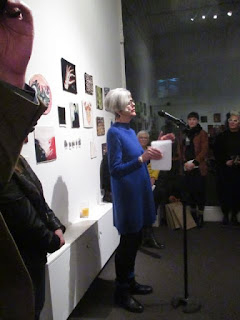 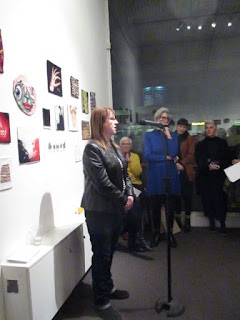 I didn't get great photos, it was too crowded! But I am sure the website and/or Facebook site will have wonderful images up soon.


We also got to see the tapestries on the loom in the main workroom, as well as many of the absolutely gorgeous samples. 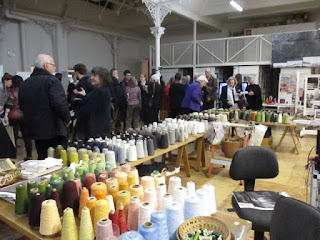 The exhibition is on till September 29th and is well worth the visit.
Posted by Mary at 8.8.17 1 comment: