I met with a couple of friends this week and asked their advice on how to put in my fish images for my swap card piece.

I had planned to use the swap cards I found in my album as the focus of the piece. Initially, I intended to recreate the actual cards. I was pleased that they were in a colour-way that I don't usually use - cool colours.
Then I decided that I needed more than three. I remembered that you often used to get packs of cards with the same image, just in different colour-ways. So I intended to make a couple of pieces that used the image in different colour ways.

With this in mind, I played around in Photoshop - not wanting to draw. 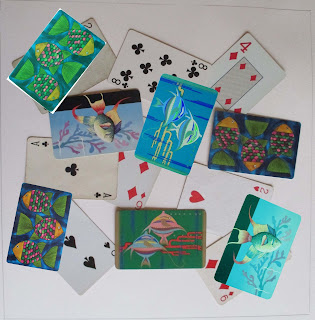 You can see the adjusted images. I hadn't thought to use exactly the colours of the copies, just to get an idea.

I had also thought to use the images at actual size. Then I realised that that was going to be very fiddly!

I decided to enlarge the images and hope that they would work.
Then I remembered that I have some old fabric that has fish on it. They were the perfect size for my new, enlarged images!! 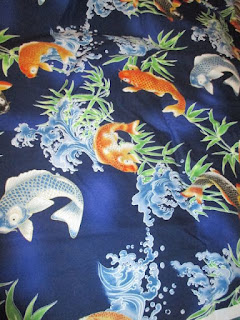 I cut out some of the fabric (fussy cutting, which I don't like because it wastes so much fabric).

I laid out several designs and photographed them so I could get a distant perspective. But I couldn't decide on what worked. 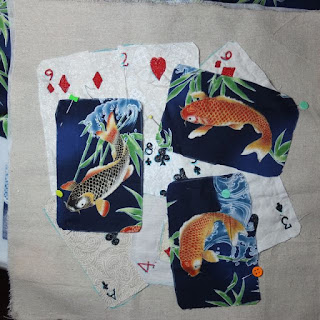 I left it till the next day - which happened to be a day I was meeting with a couple of friends whose opinions I respect. I asked them what they thought of my choices. Their instant, independent but simultaneous, responses were to not put in the fish images.

So now I have sewn what was going to be the background, and may still be. It is not hugely inspiring in itself but I have been happy with the learning process. 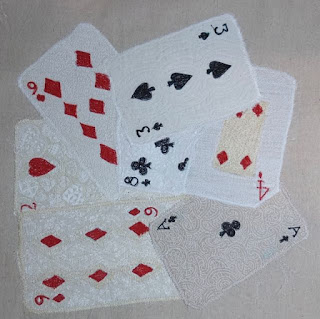 I recently joined an online group which has only been going for a short while.
We have a challenge for the month of June. I only joined in the last 3 or 4 days. So not much time to be making and doing.

However, I have found that the theme proposed and the timeframe have come together reasonably well - so far.

The theme is Collections (or Collections, I can't actually remember at the moment). Being in a hurry, I just thought, what have I collected in the past? The first thing that came to mind was - swap cards.

So, being a person who hasn't thrown out a lot along the way, I found a small collection that I have kept. I do remember getting rid of some, many years ago, but had some that I just couldn't bear to part with.

I went through the ones I had, keeping in mind that I need a fairly simple image to work with in a short period of time.  I came up with some fish cards. I decided to use them as they also are a collection of fish. 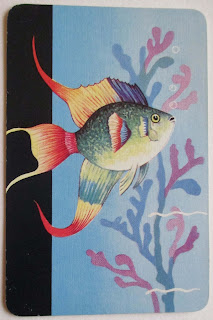 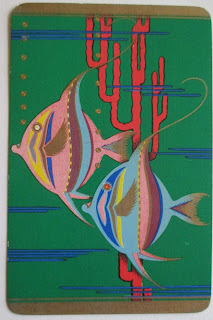 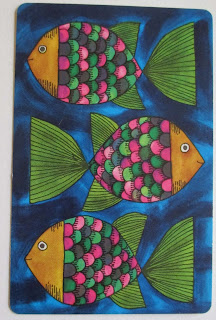 Not being person who chooses to draw, I decided to play around with them in Photoshop.

I had thought to use them at actual size and make the images. Then I realised that that might be a bit fiddly, so I enlarged the images and printed them out in black and white. I have some cards that have the same image but in different colours, so I thought I could play around with different fabrics and see if I could come up with something along those lines.

The background was going to be a bit of a problem, especially if I used the cards in an upright way, it was going to look rather regular and any mistakes would stand out. And I am sure I would make mistakes.

Bright idea - use the backs. The cards are often from playing card sets and have the usual playing card images on them. I photographed some and played around with them in Photoshop too. 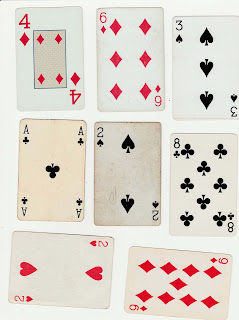 That is as far as I have got, so far. I am hoping to use the above cards as the background, then lay the fish cards over the top.
Posted by Mary at 27.6.17 No comments:

We had our tapestry group meeting today. We have been talking, in a desultory way, about using collage as a design tool.
After the bulk of our meeting, and after a few members had to leave, three of us spent some time discussing the benefits of collage and actually working on the idea.
One of our members had come prepared - with notes, papers, glue-stick and scissors.

We drew three 10cm squares each and randomly (very randomly, in my case) found a magazine with an interesting image(s) that we then proceeded to cut or tear up.
The idea was to have the 10cm squares not near the edge of the paper so we wouldn't be constrained by the need to fit the image into the edges, something that I had read previously. (I haven't cut mine to be square yet, may do so, may not bother.)

I wasn't really concentrating, was NOT going to continue my theme for my month of collages (it has to be revealed to the other group first) and so just picked an image from a skateboarding magazine (of all things).

I put glue on the square, ripped some paper up and came up with three pieces. 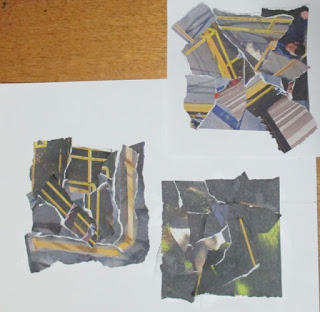 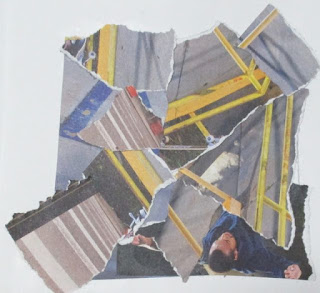 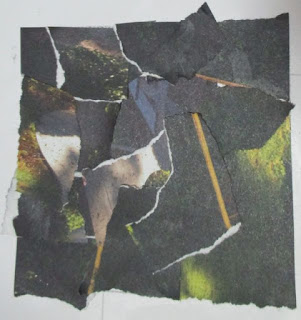 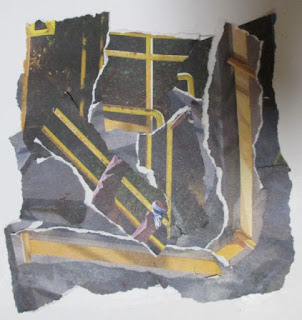 I probably won't use them in a tapestry, or a machine embroidery, but it did show me a little bit about my design process - a bit random really. I was just using one photo, trusting that the photographer is an artist and that the magazine designer is one too. So I felt that I could count on the colour co-ordination, the overall artistic base that I was using.

One of them speaks to me in terms of being chaotic - in an interesting way. So ... maybe it will inspire me to something.

Whether it does or not, it was a very enjoyable process, much more than just doing it by myself. There is benefit from doing it alone but there is also benefit from just doing it in a less concentrated way - because we were chatting about various things (mostly to do with the design process, colour choices, etc), watching what the others were doing and being creative together.

In fact, it was so enjoyable that we took a bit long and stayed till closing time! (Maybe a little bit past closing time - sorry ladies.)
Posted by Mary at 24.6.17 No comments:

Discovering the automatic stitches on the sewing machine

Today I (finally) got to do some sewing. I have been thinking about the new challenge for the Embroiderers Guild, Victoria's challenge - Take a Shell.
I took a shell.
Then I put it away.
Absolutely no inspiration.

I have been browsing Pinterest. And I have seen a couple of works there, and in person, that have used the built in stitches on the machine.

I bought my machine about a year and a bit ago - nice exact information there.

I usually only use the straight stitch. When I did the workshop with Kathryn Harmer Fox I used the zigzag stitch too. But that is all I have used on my machine.

Today was learning day!
I had Taken a Shell - today I actually looked at it.

Here is my take on the shell. It might not win any prizes in the challenge but I have finally started sewing again.

First, I attached a piece of wadding to the fabric. I am thinking of mounting it on a preprepared canvas, so it has to be the right size, with enough leftover fabric to wrap around the side. I am not particularly good at mounting works, so it will be interesting to see if this preparation is good enough. 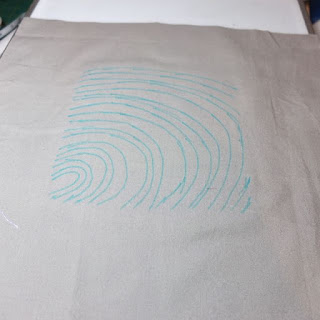 Then I drew a rough pattern, based on the shell. I hope the so-called water-erasable pen actually does erase! I have left it in the sun on previous occasions and the sun seems to have set it. It is winter and I  didn't get going till twilight, so it should erase. 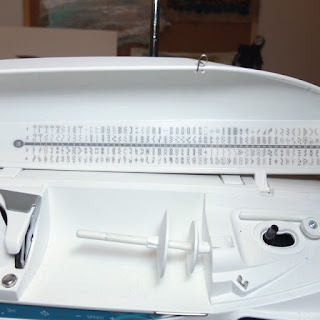 The rater large selection of stitches on my Husqvarna. I haven't used them before, it was a learning experience to simple choose the stitches, let alone the size and width. 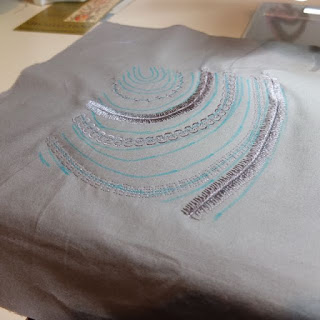 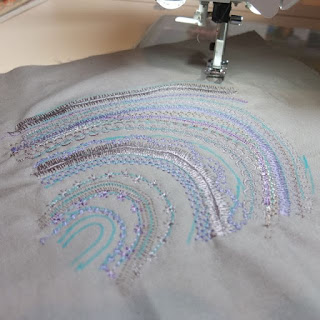 Work in progress. I had a bit of fun choosing the various stitches and turning them to fit the pattern. No free motion sewing here, I had to let the feed dogs be up, set the tension and actually fiddle with the width of the stitches. 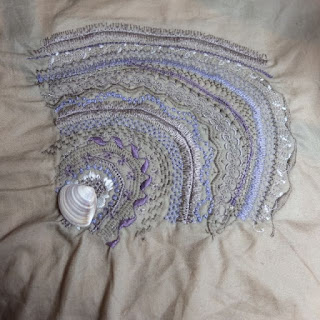 Here it is, rinsed out to get rid of the marker. It is still damp, so will be lighter when I work out how to attach the actual shell - if I do. I thought about ironing it dry but don't want to interfere with the stitching and the texture, so will let it dry naturally.
I may put the shell the other way, if it looks ok with the sewing - it doesn't seem to mimic the arc all that well.
Oh well, at least I experimented and learnt about the various stitch choices on the machine.

I am probably inspired, partly, by the tapestry challenge our small group did recently. It was based on some autumn leaves (I assume they were autumnal).

Our apple tree is gradually losing its leaves at present and I couldn't resist taking some pictures. 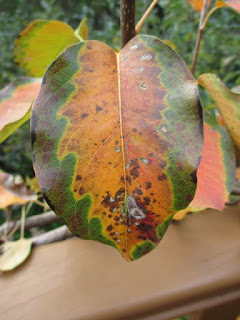 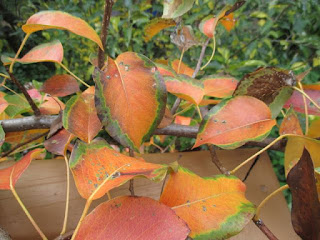 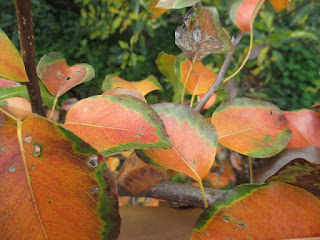 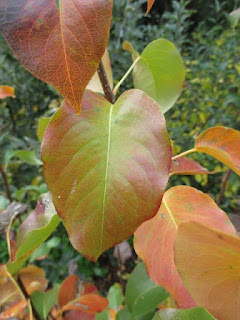 I also had a wonderful view of our very old camellia bush as I was working in the last few days. 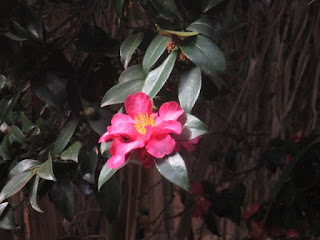 Next artist to inspire us ... Hundertwasser.

As I have already mentioned, our machine embroidery group at the Embroiderers Guild, Victoria, is working on a small A5 piece each month, inspired by a different artist.
I thought I would love this month, it being Hundertwasser but I have actually found it a bit difficult.

He has the most amazing colours, brush strokes, hidden faces, immediately-identifiable trees, etc. But I was just replicating his work, which I had promised myself I would try not to do.

So I waited a couple of weeks. In the midst of other things, I have been playing around with trying to do some collages. I found a visual diary that I had used before, for a tapestry based on the theme of My Place.

I realised that I might be able to adapt it to this challenge. So I got out my tiny pieces of scraps of fabric and fiddled around with them.  Eventually I laid them out according to a map of the local area.
I have used images of Darebin Parklands before (a lot, actually). 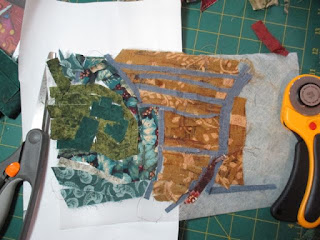 Here is the piece in its infant stage. It wasn't particularly reminding me of Hundertwasser. Then I came across a tiny scrap of fabric with some circles that reminded me of his trees. After much searching (thank goodness I did some sorting a little while ago) I found a larger scrap and could cut out some little pieces that I thought would do the trick. 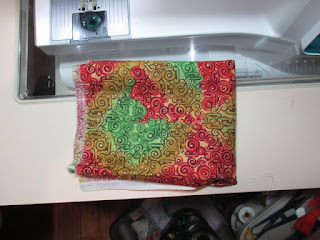 Now I have finished, it is not something that you will say "Oh, that looks like it is inspired by Hundertwasser" but I know that it is. And now you do too, because you have read this!