Playing around with collage

I can't remember if I posted about doing some paper collage recently. I was inspired by a couple of posts online, from a primary art class.
One here and one here being the main inspirations. But Pinterest does take you on a journey, suggesting endless other related links.

The idea is to put strips of paper radiating out from near the centre, then to look at the eyes and nose/beak of an animal and draw those, cut them out and put them on the collage. Voila: you have an image of an animal.

I tried it with mainly tissue paper. I was just doing a sample to show some young girls I was going to get to try this sort of art. I didn't take close notice of how to do the features and should have, my piece would have been a bit better. But I still like it. 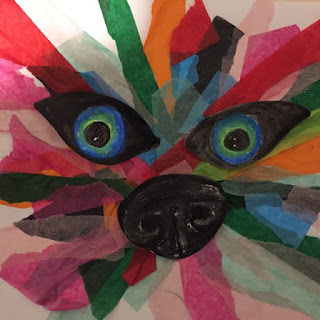 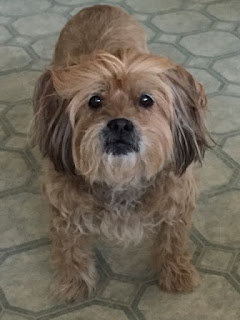 I used the face of our dog as my inspiration. I didn't take the photo till afterwards, I probably would have put in a mouth if I had taken the time and done it in proper sequence. Not to worry, the girls and I had fun.

That was several weeks, if not months, ago.

I haven't done any fabric collage in this way - until this weekend.
Once again, I am trying to do the machine embroidery group's Farmyard theme and am struggling with it. The topic this month is Pigs.

After having it in the back of my mind for ages, and having looked online at lots of Pig images, especially pig collage images, I finally got around to trying it.

So far I have laid out the fabrics, adding very minimal eyes, nose and mouth.

I laid the fabrics, which are off-cuts from other projects, all very small, onto some adhesive interfacing and then ironed them on. 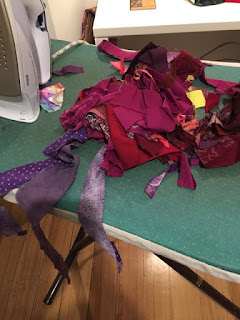 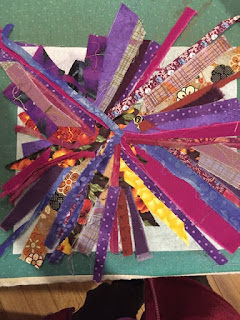 Then I cut out the shape of the head and added the features, rather haphazardly. 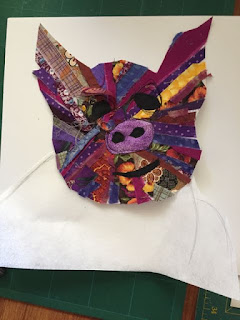 So far, so good. I went back to my inspirational image that I found on Pinterest, and decided that I needed to add some body. 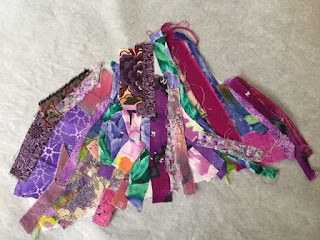 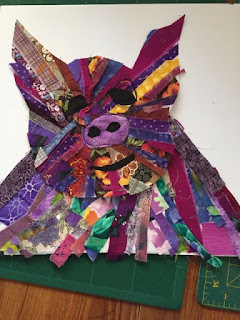 Now I have to choose the background. I was originally thinking of doing a Pig in Clover and have tried two green backgrounds. The bright green does interesting things to the fabrics. The pale green is, well, pale. 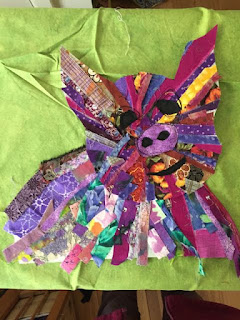 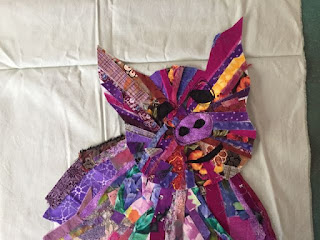 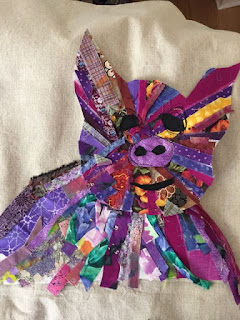 Then I tried the linen and cotton background that I have used lately for other collages. I think that is the one I will use. Probably.  I am not going to try to do the clover bit - it was going to be free motion quilting but I think it is overkill. It will be quicker to just put on a plain background too.

There is still a fair bit of sewing to do, to put in some detail and to make sure the fabric pieces are really attached. The tilt of the head needs work too.

Actually, looking at the photos makes me see them differently and now I can't decide between the bright green or the duller linen-cotton fabric. That decision will have to come on another day.
Posted by Mary at 30.6.19 No comments:

Yesterday I went to the Embroiderers Guild, Victoria (not to be confused with the Embroiderers Guild of Victoria) to our monthly play day. The demonstration was of rust dyeing.
I took along some old rusted nails, a woodworking clamp, some other bits and pieces and some powdered rust that was in the containers.

We were told to bring a spray bottle with half and half water and vinegar but I only put the vinegar in because I could fill it with water when I got there. However, our demonstrators had done research from various sources and concluded that you could use pure vinegar if you preferred. So I did, just to see what would happen.

The pieces of fabric were natural - cotton and silk, prepared for dye (washed to get the sizing off).

The fabric was then put into ziplock bags and left to do its thing.

It was recommended that we should keep the bag warm and occasionally open it to let air in because rusting happens well with oxygen.

I brought it home and put it on top of the heating vent, the current weather not being conducive to good brewing of the rust. 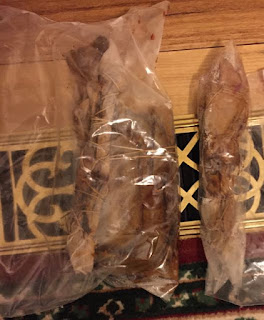 It was recommended that we leave it for several days but I could see that it was going well - and I was impatient. (After all, it is the 19th of the 19th!)

So here it is.
You can see some of the nail impressions, the screw part of the clamp, etc. 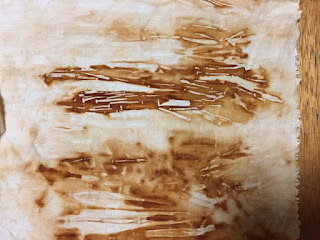 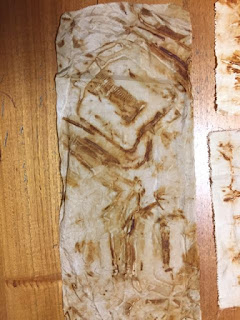 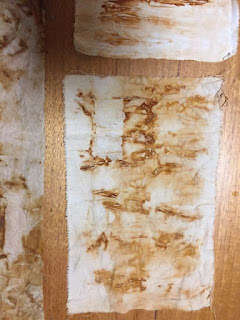 The fabric is actually a little darker than the images show. Some of the dye ran out when I rinsed it but not much.

Not sure what I will use the fabric for as the pieces are only very small. But now I know I can easily make more to go with them. So I'll put them aside for the time being and let ideas brew - a bit like the rust did.

A new way to transfer images - new for me.

I recently was inspired by a friend who had been to a paper workshop in which she used Cirtasolv to dissolve the inks on old National Geographic magazines to produce some lovely new papers.

I had a look online when I got home and found that Citrasolv has a link dedicated to using its cleaning product for art!
Having watched a few videos, it seems that National Geographic magazine has clay used in the printing process (or the paper itself?) and that might be what makes the difference.

I had some Orange Power solvent and thought I would give that a try but it didn't seem to work. I didn't have much and it was old, so it might be worth trying again at another time.

Then, as I was reading about these cleaning products, I thought: eucalyptus oil does that cleaning too.It probably came to me as I have been using it recently for my heavy head cold (it clears the sinuses wonderfully, especially if you put a few drops into steaming water, put a towel over your head and inhale - works wonders, keep a hanky nearby).

So, having read the other product information sites, I had a photo printed on a laser printer. The sites say that inkjet won't work.

I washed some cotton, to make sure the sizing was gone, and tried it.
I put the photo face down and taped it with masking tape around the edges, to make sure it would not move around. 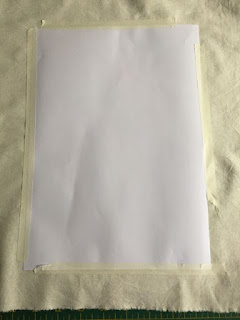 Then I gently brushed on the oil. The paper instantly became transparent.
I rubbed it gently with the back of a teaspoon for a little while - not long at all. 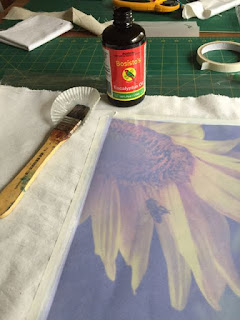 The image has transferred. The printout is still not too bad either but I think I got all the transfer I was going to get. 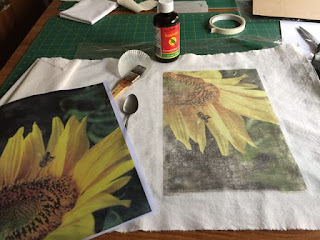 I have rinsed and ironed it and nothing seemed to come off it. As it is only going to be an experimental wall hanging piece, I didn't give it a thorough testing of fastness.

I put cotton batting behind it, into a hoop,  and used free motion sewing to highlight the different areas. 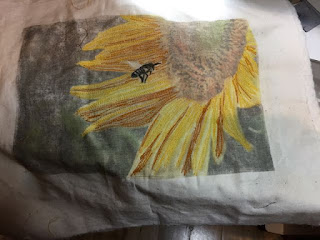 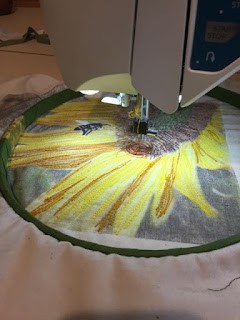 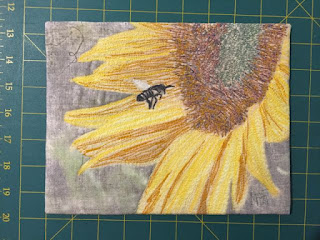 I cut the batting away to the edge of the image and then wrapped the sides around some mount board.

There was a little bit of frayed cotton under the fabric when I did the transfer and it is clearly visible so I will have to be more careful if I do another.

The piece is for my machine embroidery group at the EGV. Our monthly theme this year is Farmyard. This month's topic was farmer or farm worker, neither of which enthused me. Then I was browsing my photos and came across this one of a bee and the sunflower in our backyard.

The bee is doing the pollinating - a worker. What would we do without them??
Posted by Mary at 15.6.19 2 comments: