I was a bit late posting my 4th quilt for our first challenge. The group has only existed for about a year and we set a task of making 4 small (12"x16" - not sure of the metric dimensions, quilting always (mostly) seems to be in inches. Luckily I remember the days when we used imperial measurements - shows my age, I know) quilt.

Anyway, back to my stream of thought, after that rather large interruption.

Our last one was due last Saturday but I still only had the idea. That idea has been rattling around in my head for ages! I even went so far as to print some fabrics. It was when I was in the doldrums a bit and thought that I should be doing something.

So I got out two stamps I had - one on the soft cut stuff, which was a raised image. The other was cut into lino and gave the other sort of image (can only think of 'not-raised'). 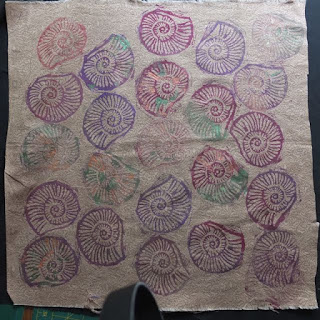 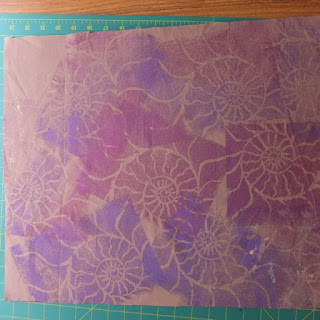 I had thought about fossils being buried in layers, so decided that I might play around with layering various fabrics and cutting back to them, using the image I have used a few times, of an ammonite. Also called reverse appliqué.

I used black fabric as the background, so I could cut back to that to represent the holes you often see in these fossils.
I have also been doing a little bit of reading about fossils and some of them become opalised. So I thought I would like to put in some colours that might indicate this - and be more interesting than the browns I kept seeing.

One of the fun things was that I used a multicoloured fabric and it was always a surprise what colour would appear.

I am not 100% happy with the outcome, the image doesn't leap out at me, but it is ok. And it is done. And I have learnt from it.
One thing I learnt, or reminded myself of, is that you need to do more than one line of sewing where you are going to do the cutout. The fabric just pulls out if you only use one, you need two to anchor it.

Also, you can't see the various layers all that well, especially that they have other fossil shapes printed on them. No matter, I know that there are other fossils buried in there.
Posted by Mary at 27.4.17 2 comments:

Some members of our small group that meets regularly have taken up a challenge, proposed by one of our members. The challenge was issued in response to our enjoyment of having participated in the Johnston Collection Christmas exhibition last year. We were commenting on the focus it gave us last year and how we need to maintain the enthusiasm.

Now 9 of us are working towards making small tapestries that are going to be put together to make one larger image. A photo of autumn leaves was divided up into 9 sections and we all have a section each to do.
We can use any hitching on method we like but we are all using seine twine 12. That is as far as the instructions go, really. We are free to choose the warp sett that best suits our interpretation, using the seine twine 12, and our colour interpretation is up to us too.

Today we brought along what we had done. Three members have finished theirs (and it was a challenge for at least one person to do that large a warp) and the rest of us have made various amounts of progress. 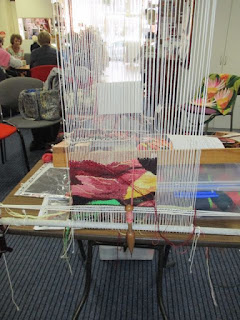 Doing part of a photo means that you are not trying to reproduce an actual image, you have a more abstract piece to work on. I have found that very freeing. I know, intellectually, that they are parts of leaves but I am working on just parts that have different amounts of light and shade and it is easier to ignore the larger picture.
I also know that we will not all be interpreting the colours the same way, that we weave differently and that the parts may not all match up perfectly - and it doesn't matter! It is part of the fun.

It was quite exciting to see pieces laid together as they appear in the photo and see the image appearing.

We are working from a small cut-out piece of the original photo, a larger colour printed photocopy (which has printed out slightly different colours from the photo) and a black and white master at the exact size for weaving. It really is aptly called a challenge, to meld those three sources.

I am enjoying it greatly! And it is making me weave.
Thanks Pat, great idea.
Posted by Mary at 22.4.17 No comments:

Once again, I attended the AQC. I left it a bit later in the day than usual, so didn't have much time to go around the stalls. This is not a bad thing as I have been trying to reduce my stash and use up what I have.

My favourite thing was the Collage to Stitch Textile Exhibition. Two of the four ladies involved were there and talked to us about the whole concept. It showed the development of their concept, from collaging a postcard sized piece, one a day for a year, to making an A4 sized fabric piece, to then making a small art quilt. Suzanne Gummow and Maxine Fry were there and very generously spent quite a bit of time describing the whole process to us. It was very exciting and inspirational.

They got together once a month, for two hours, and showed their postcards. Then they sorted each other's works into piles that they thought could be developed. Then they went home and worked on a small textile piece based on one of the collages. So there was some design and colour discussion to assist with the development of the pieces. It sounded very collaborative and organised. 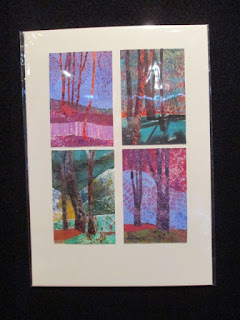 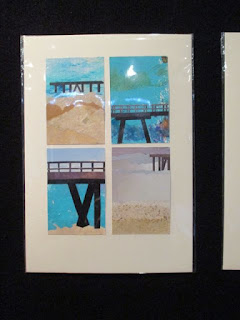 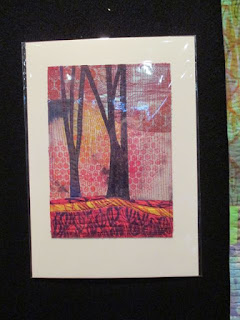 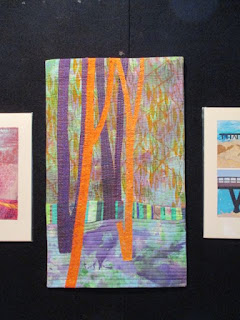 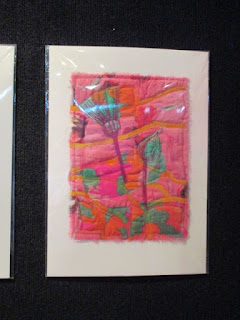 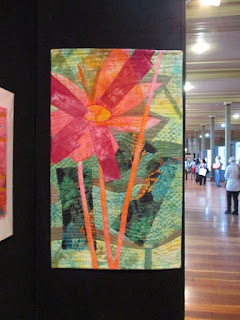 They agreed to make a collage every day, based on a theme a month. They didn't all have the same theme, they chose one that pleased themselves but stuck to it for the month. The collages were all on display - some on the wall with the sample textile and the finished textile, the rest in huge folders. 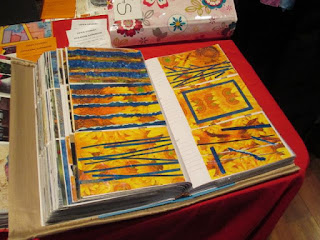 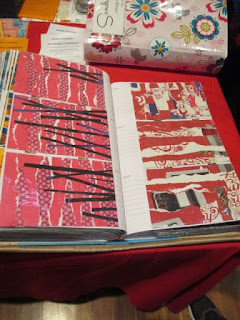 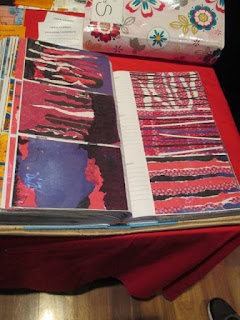 It was fabulous and, as I have already said, inspirational. I'll have to talk to some of my groups and see if anyone is interested in adapting the idea to suit us. Or I could do it in isolation but that seems less exciting.

There were the usual wonderful quilts on display and I had a lovely time wandering around being awed and inspired. Of course, the Exhibition Building is a wonderful space in itself, it is always a pleasure to be there. 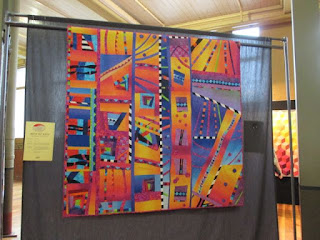 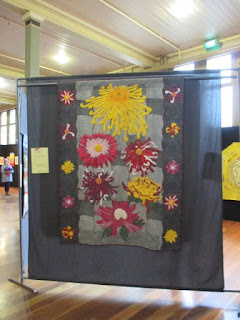 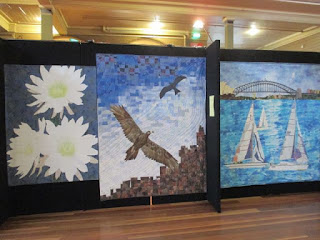 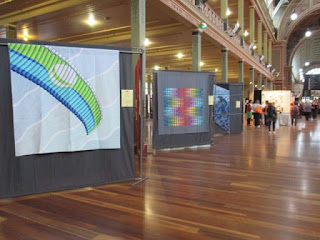 As the title says, I have been lucky enough to have a 5 day class with Kathryn Harmer Fox (4 and a half days, strictly speaking).

I attended my annual treat to myself, the Ballarat Fibre Arts workshops in Autumn.

Kathryn was a wonderful teacher, taking time to talk to everyone about their work whenever we needed her, doing a daily class crit of where we were up to, what we were doing, etc.

She was very observant and noted our different working styles and was able to tell us how we worked, which we were not necessarily aware of. It was all done in a very positive way. Our strengths were pointed out and our blockers also.
One person was having trouble with the image she had brought. Kathryn suggested she do it upside down. Apparently, it was much easier after that. Not that I could even attempt to do faces! 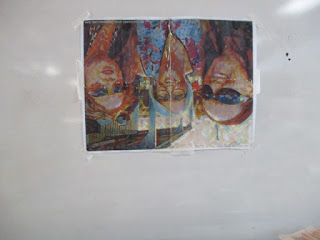 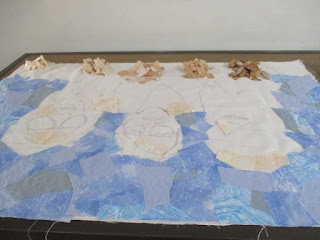 So now I have a clearer idea of my method, which seems to be having an idea in my head, prompted and helped by an image but not necessarily adhering to the image. All this makes it rather difficult to know how I am going with the work, as I seem to make it up as I go.

Kathryn's work is much more realistic or representational than I like to do but that didn't stop her from being able to help me a lot. She is a wonderful teacher as well as artist.

We also worked on one piece each for the whole workshop (well, I did spend the first day doing a small piece but it didn't work out, 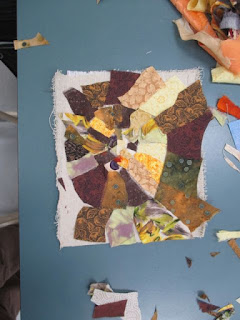 then I worked for the rest of the workshop on my bigger piece). 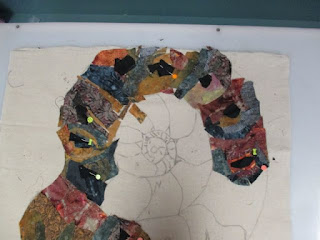 As I have mentioned previously, the Machine Embroidery Group, which is an interest group at the Embroiderers Guild, Victoria, is having a challenge this year. We are asked to make an A5 (14.8 x 21 cm, 5.8 x 8.3 inches) piece that is inspired by a different famous artist each month. This month it is Van Gogh.

I am waiting to go to the upcoming Van Gogh exhibition that will be at the NGV soon, but decided to bite the bullet and do one before I have the chance to attend.

I was all set to do an image using my fabric collage method. I got out all the bits and pieces I thought I might need. It is amazing how much stuff you might need to make such a small piece!

Then I came across the small pieces of indigo dyeing I had done recently. One piece seemed to be perfect for the sky. 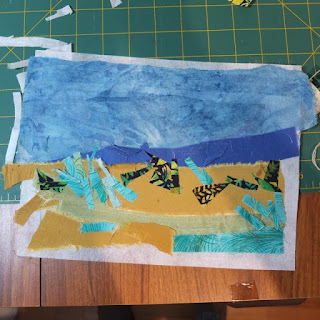 I ironed it onto some adhesive interfacing, placed some other larger pieces (larger than I had planned to use) and then put a few fiddly small pieces, which had been Vliesofixed. Then I got out my newest favourite thing, silk roving (or whatever it is called). I laid that out over some Vliesofix, ironed it on gently, then sewed it all on to make sure it will stay. I also added a few small pieces of wool left over from some tapestry weaving. 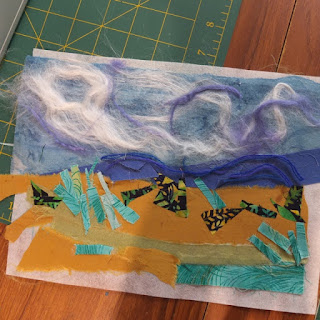 Voila! My Australian version of a Van Gogh image. (You can see the inspiration as one of the scrolling images at the NGV site.) 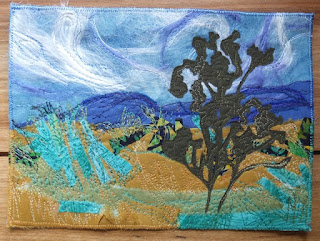 As I have already mentioned, I get together with a couple of friends each month (when some of us aren't away on textile week-long workshops).

Recently, we did some indigo dyeing. I wasn't particularly well prepared and only took some small pieces of fabric. But I enjoyed the experience and came away with some interesting small pieces of silk and cotton. 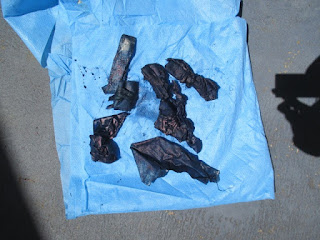 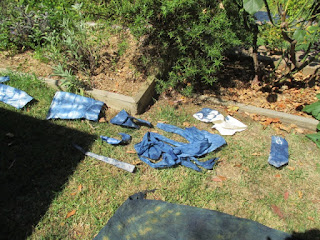 I was especially happy as some of them looked a lot like water (to me) and I have put them aside in case I come up with an idea for the Ebb and Flow theme of the Embroiderers Guilds' Members' Exhibition. That isn't till October, so I have a bit of time to think about it.

My friends had much larger ambitions than I, they overdyed some shawls they had. Very successfully, I must add. 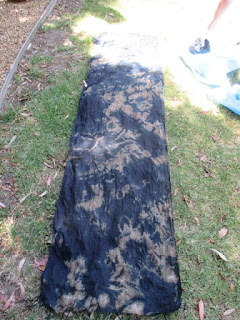 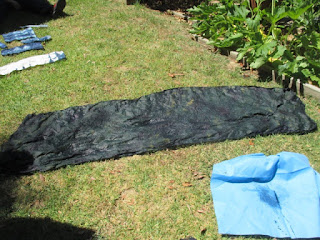 At our most recent get-together, one of our group had recently returned from a workshop in the Grampians where she did some natural dyeing. She had some gorgeous show and tell!

She had a woolen scarf/shawl that she had dyed using native cherry (I forget it's proper name, sorry. Also, when I looked it up, there seem to be two sorts, one is eucalyptus and the other is some sort of cyprus. I think she used the cyprus). She made up another indigo vat and showed us a very easy method for overdyeing that used a piece of clothes line that she wrapped the scarf around and scrunched it down. Then she just dipped it in the dye for a few minutes. The result is beautiful.

The other group member had a linen, much looser weave, shawl that she decided to try. It worked wonderfully too. 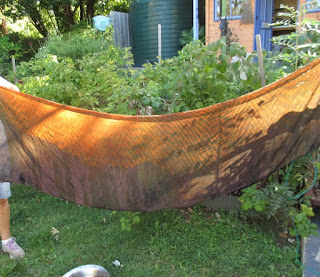 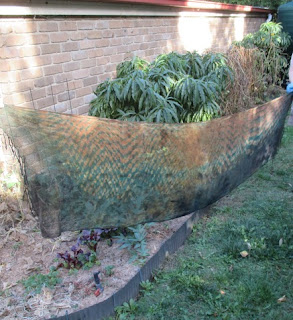