My local tapestry weaving group met last weekend. We hadn't expected to as it was the weekend of Australia Day but most of us were not going away and the guild rooms were open. So we met.

This was another time that I had to organise myself to have something to be going on with. I do have a small piece on the go - the very slow go. The last time I touched it was last year (which isn't all that long ago, I realise), just before Christmas.

Out came the loom, then I had to find the wools.  I couldn't find my design images anywhere. Still haven't found them. 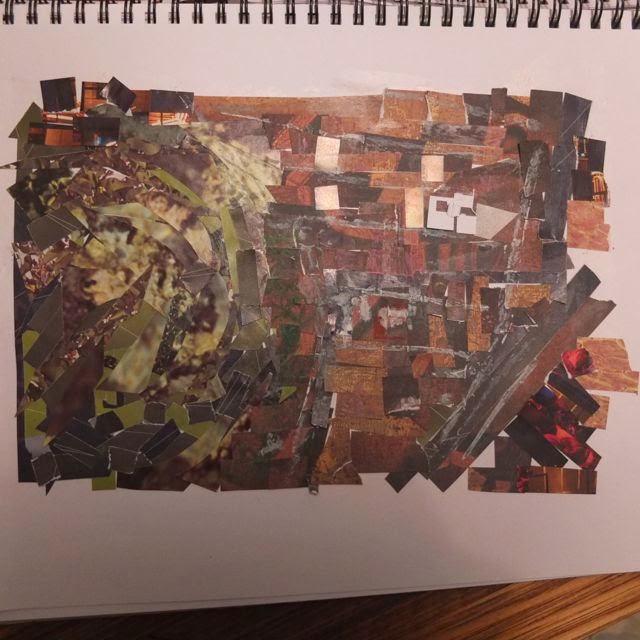 Fortunately, I had decided that I was getting confused using both my original image and the collage I developed from it, so I had traced another image and roughly coloured it to use as the cartoon that was attached to the loom.

Once at the guild rooms, I had to use this only. I hadn't intended to use it in isolation, so the cartoon isn't particularly detailed. But we were meeting and everyone was working, so I just had to go with the flow. 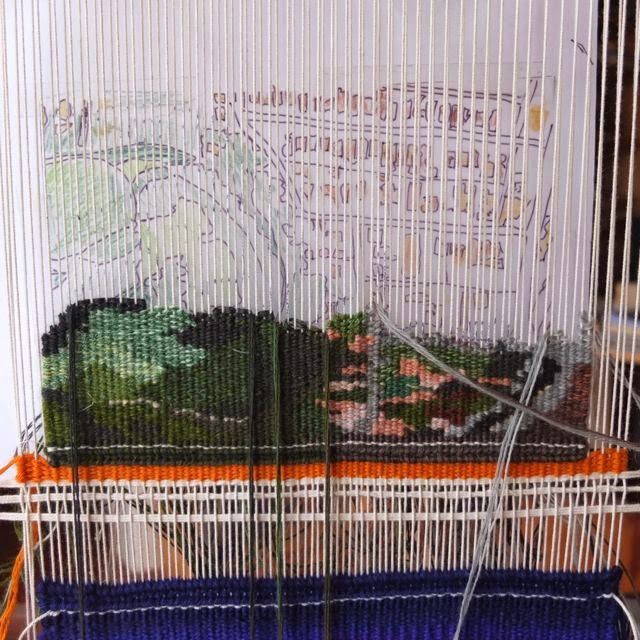 I have even done a little bit more at home. Just a couple of hours. But now I am hopeful that I might get it done by the end of February, in time for the online group's challenge. I have gone in it for the last few years and will be disappointed if I don't get it done this year. It is good to have these deadlines that can seem stressful but are actually inspiring. And only I will be disappointed if I don't do it, there are no sheep stations hanging on getting it done.
Posted by Mary at 30.1.15 2 comments:

Returning to a more normal timetable.

When I was a teacher, in my former life, I used to love January and tried to keep it low-key, rejuvenating for the coming year.
Now it is rather slow and most of my usual things are not on. The interruption to life caused by the renovations, and waiting for that to resume, has contributed to all this also.
But things are starting to click into gear again. We start our Design for Stitch course again in February (next Sunday - rather closer than I had realised).
I haven't exactly been working the fingers to the bone doing the homework, so I got out bits and pieces to actually do some sewing today. It took a while to get set up as I had to find where I had cleverly put all my threads, then the hoop to hold the embroidery, etc. Then I couldn't find the silk painting I had prepared.

I eventually got started.

I broke two needles, the thread kept breaking, the tension wasn't right and I was beginning to think it was all a Bad Idea to start today.
Perseverance paid off though and I now have one small sample done. Hooray.

Mind you, a bit of the machine fell off the back as I was working, I'll have to investigate that further. It didn't interfere with the sewing, so I haven't really looked at it yet.

What have I learnt today?
I think I may have used silk that is too fine - again. I thought it was heavier than the piece I took to the Alison Holt workshop but you can still see where the needle is pulling the threads of the fabric, so I might try a heavier weight silk next time. Maybe I should not just use what I can find in my stash but actually buy the recommended weight. Probably won't though, I have too much silk hanging around and I am only experimenting with ideas at present. 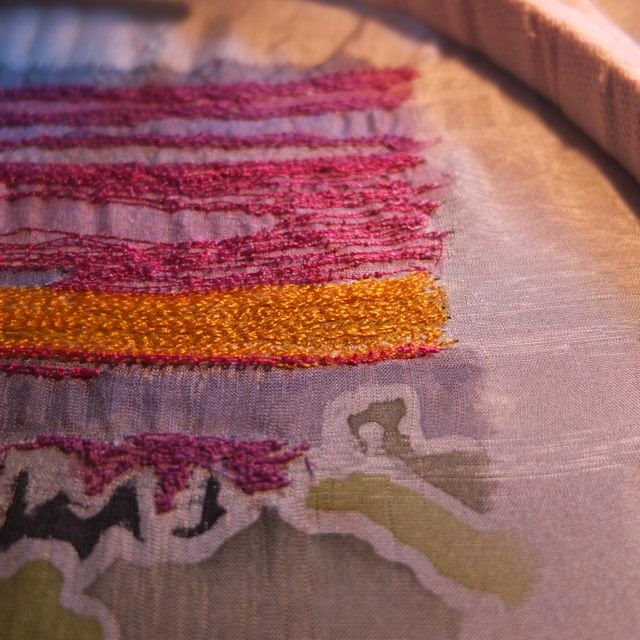 The gutta I used was too thick for the fine image I was using. I will try to find a smaller nib for the bottle. I had to sew over the white parts quite heavily, hence the constantly breaking thread. It was also hard to tell exactly where the buildings were supposed to be, I just made it up a bit, so it doesn't look like the skyline I was aiming for. Not to worry, I can try again. Maybe I will even do it on a larger scale for the skyline - but that will give me a smaller sky. Hmm, that might not be what I am aiming for. 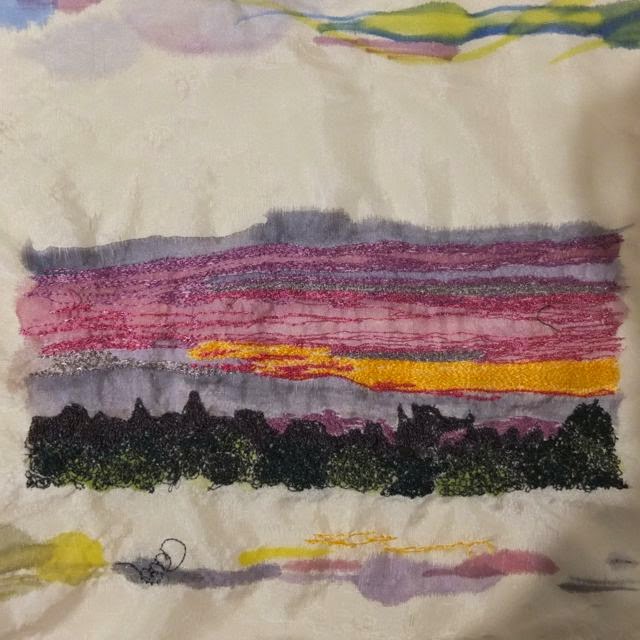 Here is the finished piece - if I don't decide to do more sky.

Here is the same image cropped, it is interesting how it seems more dramatic when the white surrounds are taken out. I'll have to be careful how I mount it, if I bother. It is not very big, approximately 20cm x 8cm. (Actually, it looks a lot better on the computer than it does in reality, but it may be better once I mount it.)

Obviously, I need to try a few more samples. Now that I have found most of my equipment and the machine is set up again - assuming that the little bit that fell off the casing doesn't really matter - I may even do another before the class.

I do have another little silk painting prepared, I had used a largish frame for this one and decided to paint another scene while it was pinned. 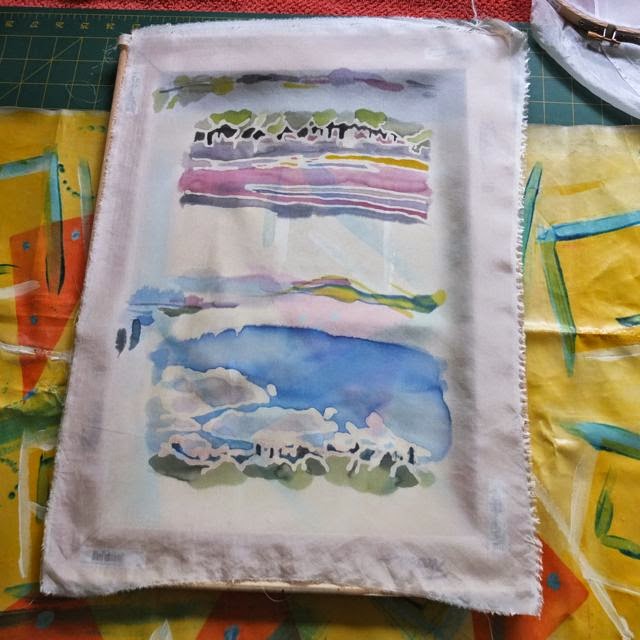 I used the same gutta and the skyline is even harder to see on this sample. I think I will see if I can trace it again, using a soluble pen maybe, and then sew it.

Well, not really peer pressure, just the pressure to have something to be doing when friends get together for a creative day.
So I searched for hours yesterday, trying to remember where I had seen the various bits and pieces I wanted, where I had put them when we packed up for the start of the renovations.
I eventually found as much as I needed (I hoped) and packed the car.
I had some photos I took recently, of a spectacular sunset nearby. 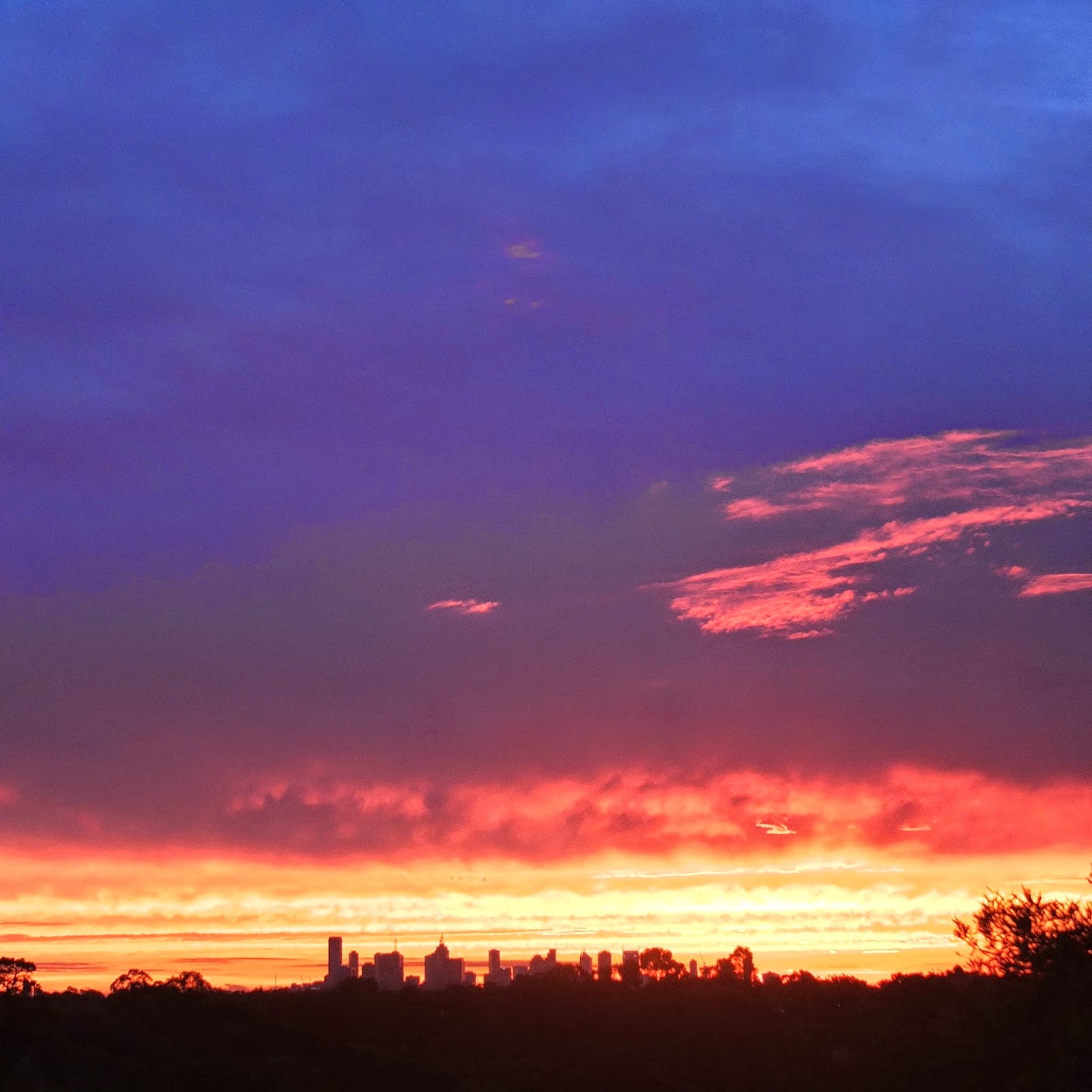 I had lots of them, the sky just kept on being beautiful and changing quite quickly. It was hard to choose which one to focus on. In the end, I chose a couple and will try to work out how to use them as inspiration.

I had decided to have a go at a piece similar to one I did at the Alison Holt workshop. Except it is not the same sort of image and I will have to make some of it up as I go.

So I got out the silk and paints and the gutta and had a go today.

What did I learn?
That I probably should have used a thinner nib for the gutta, the outlines of the buildings on the skyline are much too thick and the dye doesn't extend enough.
That maybe I should not have used the gutta in the sky.
But it was a day for experimenting and I may be able to change some of it when I get around to sewing it. I will have to look up my notes and see if they were helpful. The last workshop was for reflections in water and the amount of painted silk that you do not sew on is clearly there. I'm not too sure what I will sew and what I will leave as just painted silk, if any.
There are lots of examples on Alison's website, it the gallery, so I will have a closer look before I start playing around.

It doesn't really matter how it turns out, at least I did some creative work today. And I hope to do some more in the near future.
But there is still a fair bit of tidying up that needs to be doing. And sorting and throwing out. I'll try to fit in some creating as well.

Still looking at the sky.


The renovations continue. I am doing lots of work in my head, hoping that I will be able to develop some of the ideas once my studio is set up again.
I am still obsessing about skies and clouds and the various colours and patterns you see. 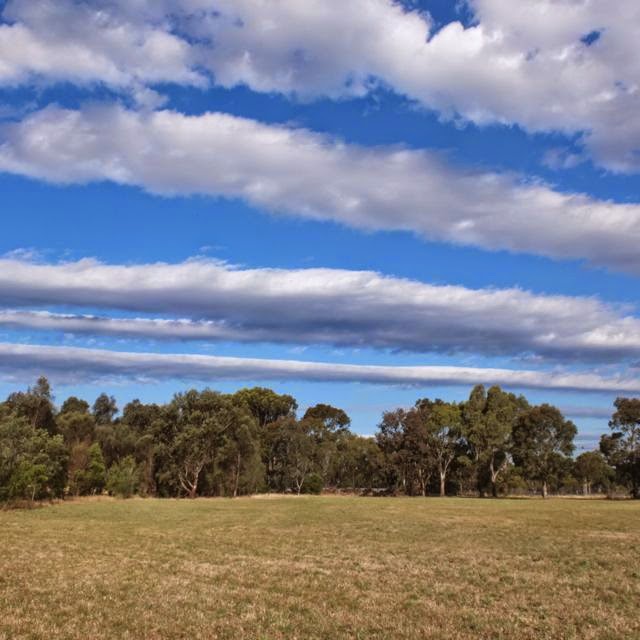 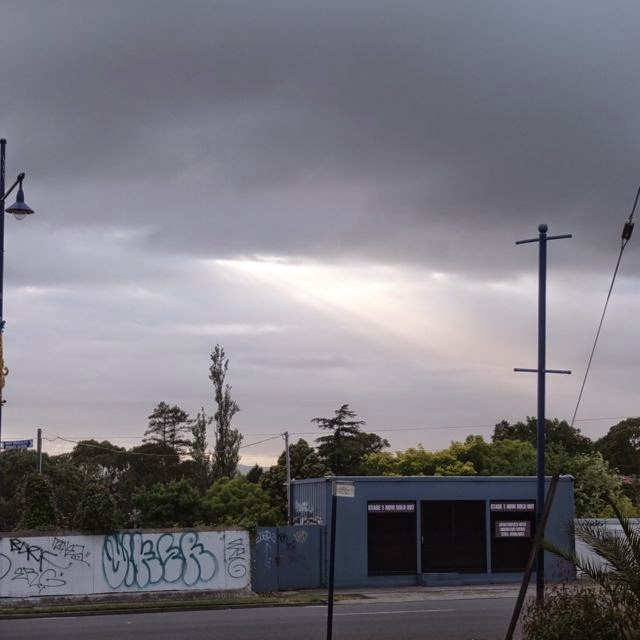 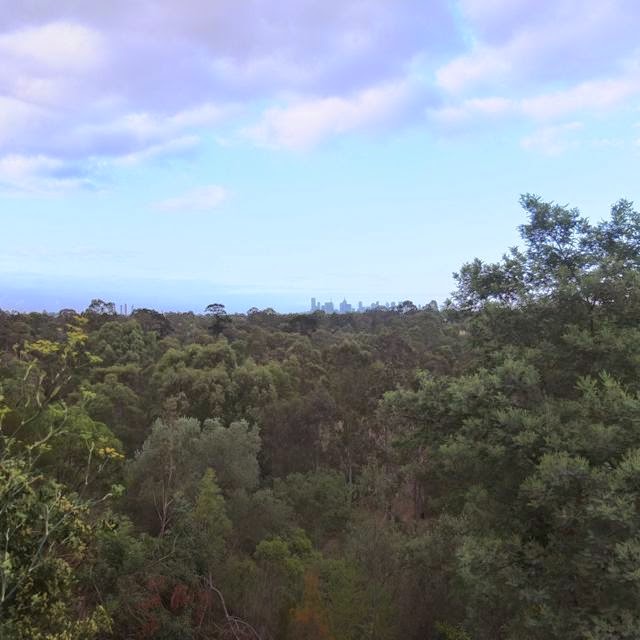 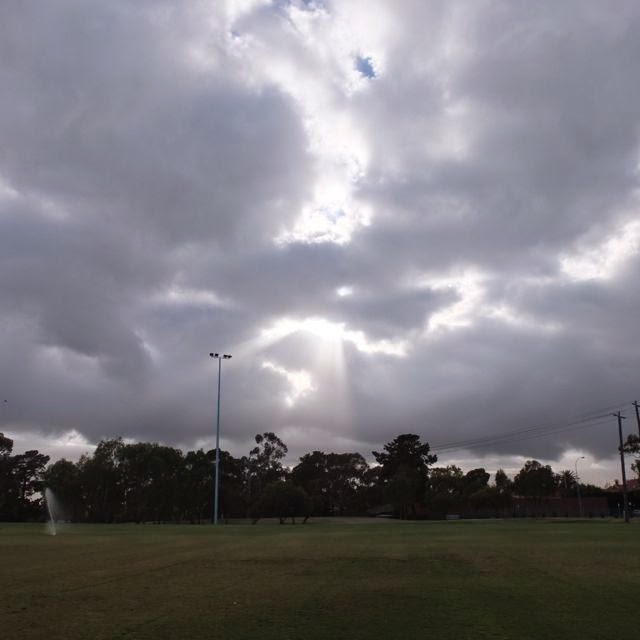 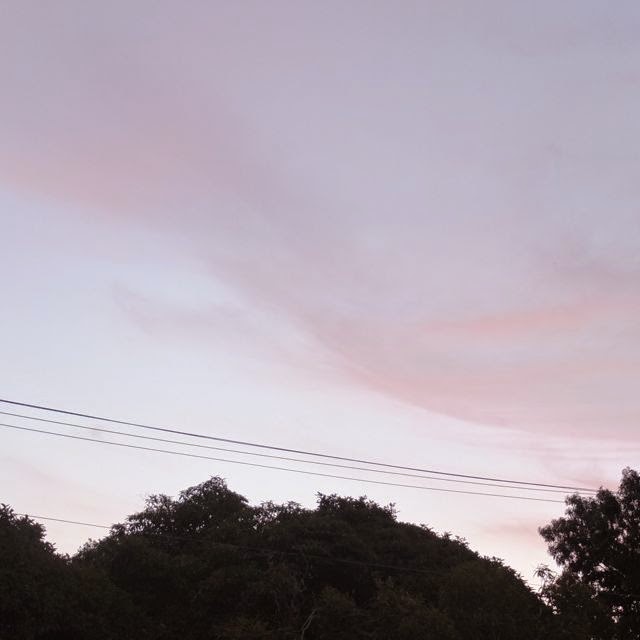 And I am still being influenced by the workshop I did recently with Alison Holt and keep taking photos of the river in case I ever get around to sewing again. The advent of the hot weather is a bit off-putting and I have to put all my stuff back into my studio - once it is available again. 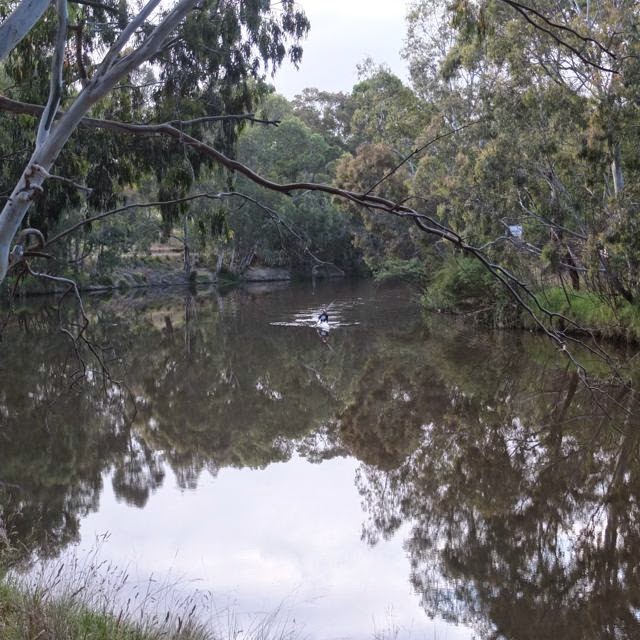 I am hoping to go through my stuff and throw out a lot - maybe that will happen! So I am expecting the sorting to take a fair bit of time, meaning that not much sewing or weaving is going to happen.
I have actually started my My Place tapestry but haven't got far. Now that it is going to be hot I can see that it might be slowed down even more, if that is possible.
Still, one can live in hope.

It's That Time of Year Again.

Happy New Year to my thousands of readers!
Today sees the first of the hot summer weather begin in Melbourne - unfortunately.
The hydrangea is in full bloom, 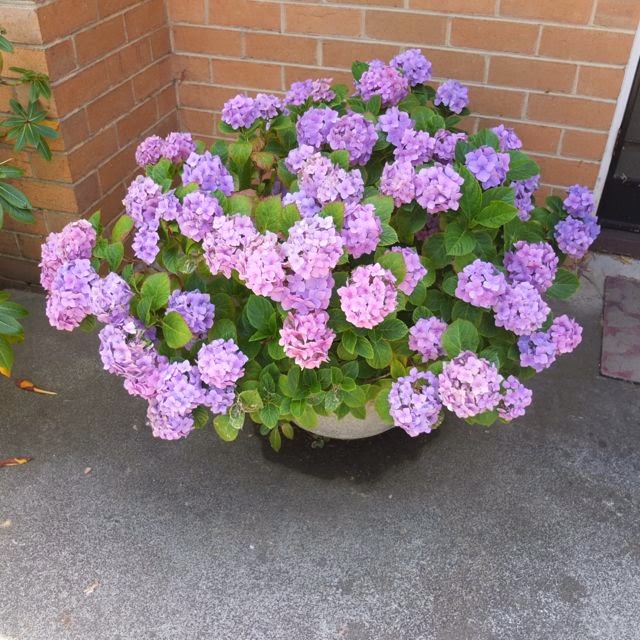 the hollyhock is throwing down flowers left, right and centre - 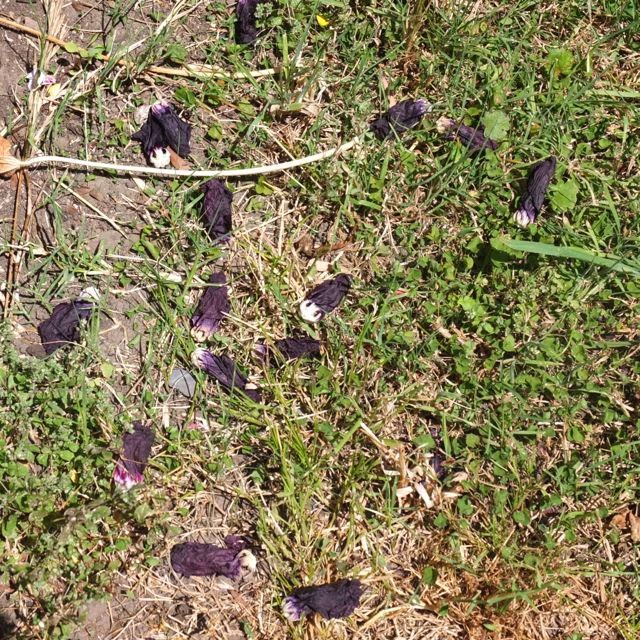 what a waste!! I am not collecting them as there is nowhere to put them or work with them at the moment. (Renovations continue. Things are still in boxes.) 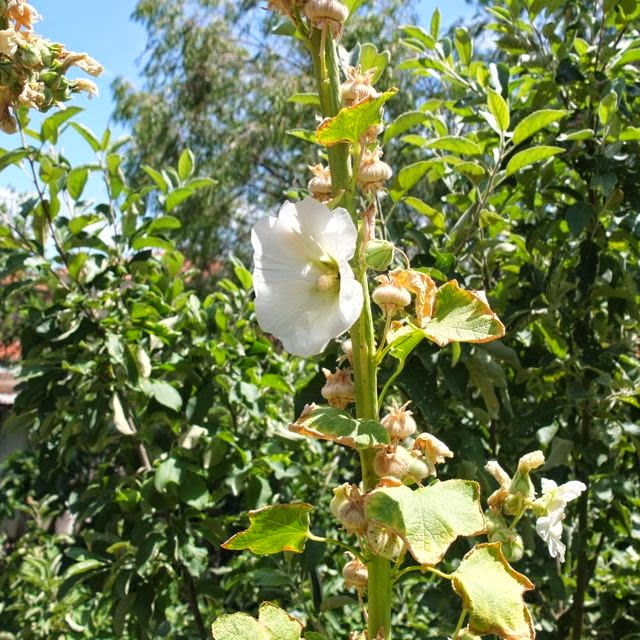 We also have a white one that has come up, no use for dyeing at all. 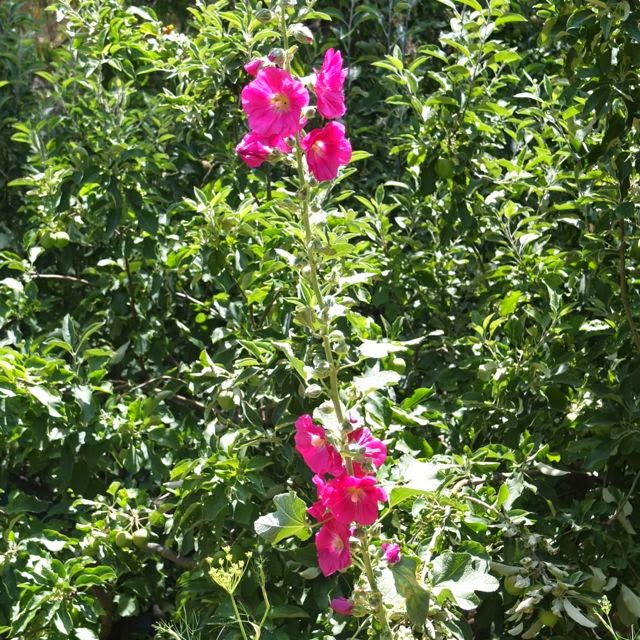 And a pink one, I might try it one day but not yet, I need to use the fabric I dyed last year first, which was from a darker flower.
I'll just have to hope the flowers continue to bloom as long as they did last year - and that I come up with an idea for using the fabric.