The loom is warped.

Well, warped might sound strange, it is not actually bent. But the warp is on the loom.
Now the loom is looming in my mind! 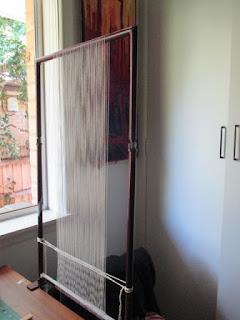 Such fun with phrases that actually have textile connotations. Weaving a tapestry - can just mean making up a story.
Embellishing - adding to a story - or a piece of textile work - or lying (embellishing the truth).
There are many more expressions; I remember that there was a theme for work going around, based on textile expressions. It was fun to read them.

Anyway ...
I have put the warp on the loom. I even drew a cartoon for it today - but forgot to bring it home. Not to worry, this piece is going to develop without a proper cartoon anyway. It is going to grow organically. I hope.

The theme is Growth. I think my piece is just going to grow. But, there is no plan, no cartoon that I am intending to use closely.

I will be out all day tomorrow (going to the Edith Head exhibition at Bendigo), so the weekend is the time to actually start weaving. There may be a cartoon, there may not be. It is all in my head at the moment.

Or I may go with my original idea - No Bees, No Growth. But that will take some planning and designing, something I am not feeling like doing at the moment. I think I will just go with the flow. I have come to realise that I love texture, and that is what I am hoping to use in this piece.
Posted by Mary at 22.11.17 2 comments:

Well, I have been throwing out some old stuff lately, trying to make room for new stuff, of course.
I have been going through old class notes from my course at RMIT. I started in 2006, which doesn't actually seem that long ago.
I came across the artist's statement for a piece I did in about 2011 and I am very glad I am not still in that headspace! My statement was about how people are putting on endless (seemingly endless) art shows about the environment and how we are (and still are, unfortunately) ruining it.

I was OVER IT. I felt like I should feel guilty for being alive, for using up precious resources.
Fortunately, I don't feel that bad about it now. Maybe it is closer to despair about what people are doing and not doing, about the amazing number of deniers who seem to get so much air space. But I am hopeful that it is more to do with the fact that I am doing what I can and so are others and that is all we can do. And there seem to be plenty of people who do care, despite the politicians.

Whatever the reason, I think I am in a better mental space now.

Now to my header: Drawing - who knew?
I often go to workshops and say that I don't draw. (I attended a workshop with Kathryn Harmer Fox earlier this year and she said that we shouldn't say we can't draw, just that we don't, hence the don't draw, not can't draw.)

Then I came across these old visual diaries and discovered that, when I am made to, I can draw. Who knew?? 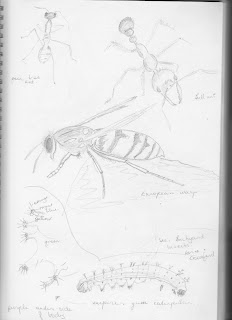 These were for a screen print assignment, base on insects. Once upon a time, I knew how to do repeat patterns.

I was quite surprised by some of the images I had come up with.
Maybe that person saying that we should draw every day had something going for him. But I don't see a revolution coming upon me - yet. 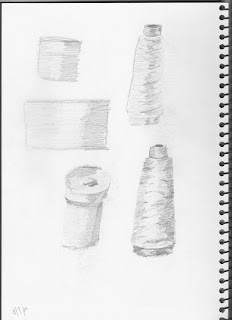 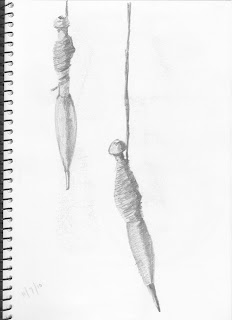 Trying to draw every day leads to rather mundane subjects. 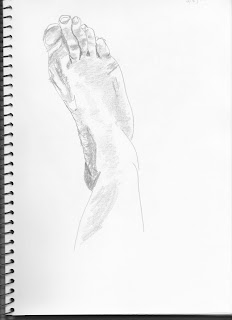 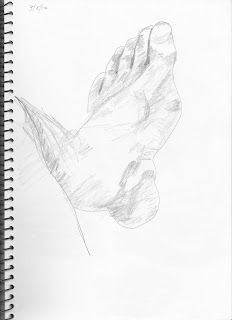 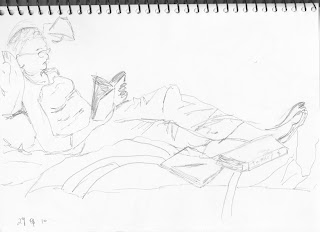 These were from a trip to Turkey. I couldn't bring myself to draw in public (still can't) so I have quite a few drawings of my feet and fingers. And one of my roommate (which I actually recognise as her!)

It was fun going through old visual diaries and folders of notes. I threw out some techniques that I am definitely never going to do again. I discovered some that could be useful now, in a slightly different way. Then there were the ones that totally relate to what I am doing now.

A Shadow of Itself

One is in the backyard, while I was out enjoying the wonderful Spring day.

The other has answered a question I often ask myself - where do they store the goalposts in the off season? 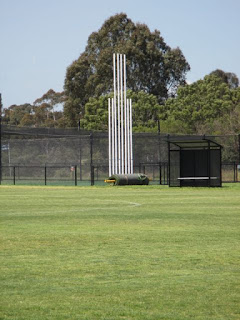 Right beside the batting practice nets of course.
Posted by Mary at 9.11.17 No comments:

The Machine Embroidery group has had a challenge going, for quite a while actually.
It was of two photos that were cut up into mystery pieces and we were given the piece without having seen the original pictures. Each piece was supposed to be a stand alone but also fit into the larger picture. 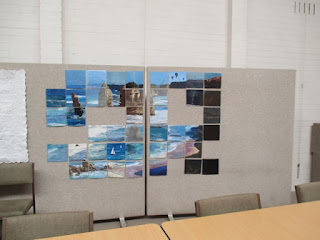 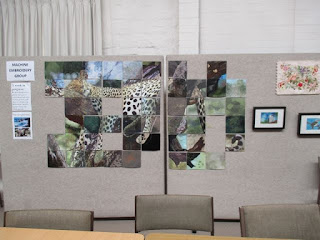 It was amazing how some people were able to make the images stand alone and yet still clearly be important parts of the overall image. 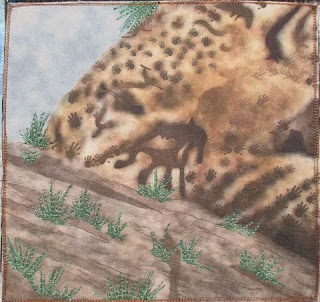 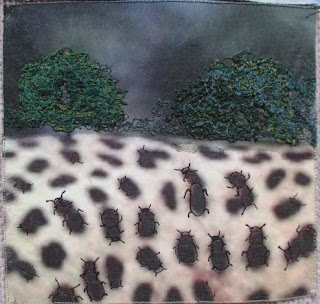 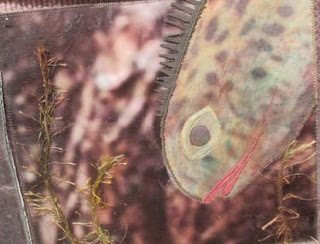 Today we put up the ones we had. Unfortunately a couple of people were missing from the meeting and the picture was not complete. However, it is great to see how it is coming together. Hopefully the missing pieces will come in over the next week or so and we will see it in all its glory by the end of the month.

Thanks to My Camera and Me: see comments on previous post.

I have used the automatic selection tool and it got most of the image. Then I used the 'Inverse' command and this is the result.  Is this what you meant??
Anyway, I like it. 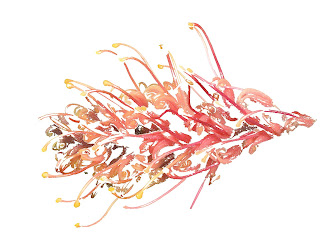 But I will have to let it sit there a while before I decide how to use it.
I do have a challenge coming up, for a tapestry group. So I will have a think about how I would weave it - if I can weave it.

But thanks for the idea.

On another note:
The Machine Embroiderers Group met at the Embroiderers Guild, Victoria today.
November is our month for displaying some of our work.
We have had the monthly challenge, Inspired by ... (various artists). Only a few of us have done all of them so far (one person has even done next month's one - overachiever that she is). So I was able to put my other group's Inspired by Van Gogh pieces in too.


I have hung my small Matisse-inspired piece on a slant, due to my not knowing the best orientation. Twice, people tried to straighten it! So I expect it will be 'fixed up' by the time I see it again.
Posted by Mary at 5.11.17 2 comments:

Continuing to be inspired by ...

This month, it is Matisse.
I have not had a lot of time to work on this piece. Our meeting is tomorrow morning and I thought I would like to be up to date. I did some minimal research and came across some floral-inspired paper cutouts by Matisse.

I had a photo of a grevillea, that I took years ago, for my Photography subject for my Studio Textiles and Design course. The photo is about 9 or 10 years old. Not that that matters, it is still a lovely image. 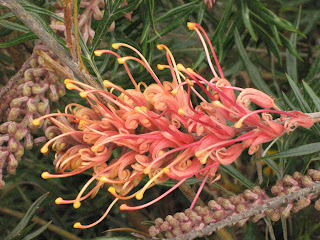 I played around in Photoshop. First, I made it black and white, to see the shapes more clearly. 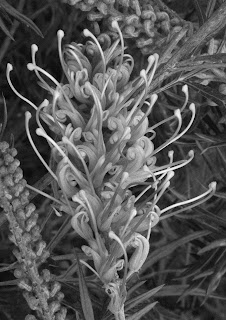 Then I looked around, knowing there must be an 'inverse' command - I visit a blog (My Camera and Me) where I know I had seen it and wanted to try it myself. I came across it almost randomly (don't ask me what menu it was in, I don't actually remember).
I found that image to be very helpful. 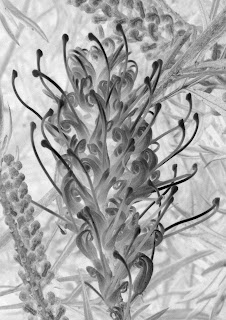 I freehand drew my image - I rarely draw, so that was a plus. Seeing I am emulating paper cutting, there is little detail, something that actually made it easier.

I traced the design onto Vliesofix and ironed that onto my fabric. Once again, I resisted going out and buying fabric, I am determined to use what I have, as much as possible. 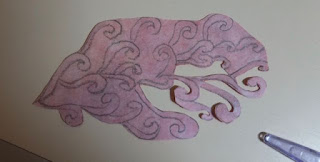 I have a wonderful, tiny, pair of very sharp scissors that do the cutting out wonderfully (with my help, of course).

I then drew the other parts of the flower and traced them onto Vliesofix also.  More cutting out. 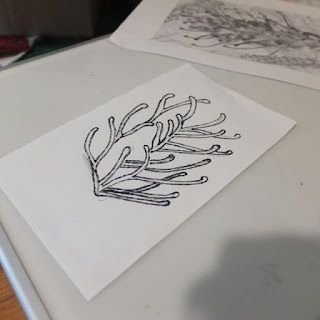 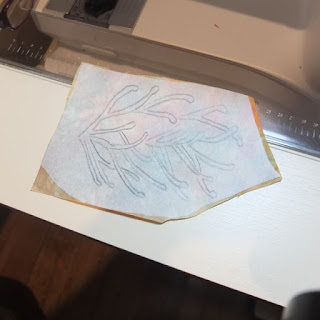 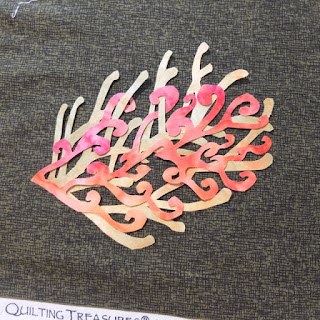 After ironing them onto my background fabric, I had to sew them on. I rather liked the fabrics, so have tried to keep the sewing unobtrusive. 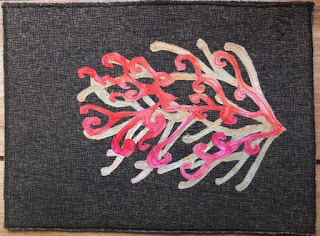 My quilterly soul wanted to put some detail in, some suggested leaves, for instance. But when I looked at the inspirational images, there was not much detail, if any. So I have just sewn it to some felt and left it as is.

You may have noticed that my images are not all in the same orientation. That is because I was having difficulty deciding how to orient the final piece. I have made it upright, for no particularly good reason. There were several orientations that would have worked.

All these exercises in being inspired by various artists has led me to experiment with different techniques, try different design techniques and play. I have learnt quite a bit, even though they are quite small pieces (A5). In fact, the small designs have been a bit of a challenge sometimes.
Posted by Mary at 4.11.17 2 comments:

Labels: Matisse, my camera and me, paper cutouts, Photoshop

It is almost a month late but I have finally done my A5 piece for the machine embroidery group.

I knew very little, if anything at all, about Miro. I now know a tiny bit more.
One of the things I discovered is that, although I quite like his art, I didn't feel at all inspired to try anything textile from it.

But, being the determined person I am (sometimes), I have come up with a little piece.

I found an image online called Personages in the Night.
I saw angels and stars and, it being within cooee of Christmas, I have made something.
I even used some glittery, metallic-looking thread. (I don't think it is metallic, I never seem to be able to cope with that and I have vague memories of buying this from the Embroidery Source and being assured I would manage with it - which seems to be the case.)