Our course in design has made me explore various ideas. I have played around with pattern, relief (slightly 3D) forms, artist books and colour.

One of the ideas that I tried was to make an artist's book made of thread patterns sewn onto soluble fabric. 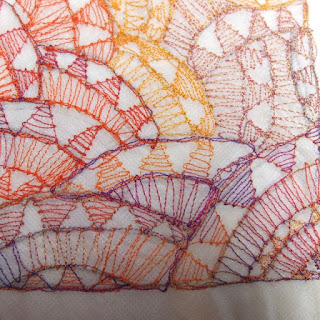 I got the pattern from the internet, Liz Plummer's page on  how to make a concertina book.
I tried to copy her pattern but didn't use covers for the ends. I could not get the book to stand properly. There were a couple of reasons for this. The main one was that some of my 'pages' were too flimsy and would not hold the weight of the other pages.

The other reason seems to be that I tried to copy her idea of attaching two pages at a time, then turning each pair 180 degrees and attaching them. I just couldn't get it to work. Another contributor to the problem might be that my squares were not all the same size, due to the variations in shrinkage, depending on the density of the sewing and, probably, the different threads used. (I have to admit, that I just use colours that appeal to me, that I haven't really taken much notice of what the threads were made of.)

Marianne, our teacher, made a paper model for me that didn't turn the angle, all the pages were attached in the same orientation. It looked lovely in paper form - which is what the design is developed for, of course. 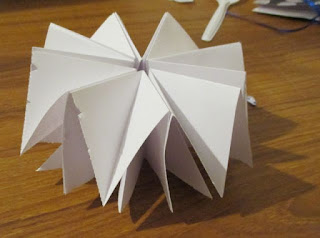 So I decided to take apart the little bit I had done and reattach the pages in the same way. It looked much better. 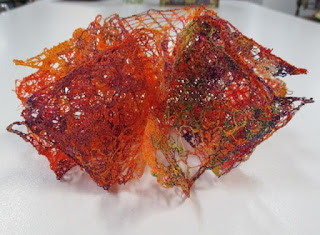 However, two more problems cropped up:
the flimsy pages didn't stand up very well and the book didn't stand properly
I accidentally attached all the pages, not leaving the last one so that I could fold the book close, and it got squashed in transit one day.
So then I had to take it apart again, partially, and devise a new way to make it stand up. I took out a page that wasn't as solid as the others, folded the book down hard to get it back into shape, and then attached some very small eyes and hooks to hold it closed when I want it that way.


Hopefully, it will not get much handling and will stand up.
Posted by Mary at 26.7.15 No comments:

We have had a pair of prayer chairs ever since I can remember.
In our recent cleaning up it was suggested that we get rid of them - my reaction was instantaneous - NO.

They have a beautiful design - I keep getting mixed up between Art Nouveau and Art Deco but it is one of those. 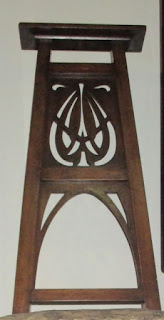 As I was sitting watching tv recently, not something I do a lot of, I noticed some gorgeous shadows being thrown by the chair.  I have tried to take a photo but it was hard as I needed the darkened room and the shadows. So here is a rather poor photo.

Recently, I have taken up knitting, after decades of not doing any. One of the things I have noticed about the change from earlier days is how often you have to buy skeins, rather than balls, of wool (and how expensive wool is these days!!). I am really bad at pulling skeins apart. I even borrowed a wool winding machine once but my friend banned me from using it again as I kept changing direction while I was doing it. I am really, really bad at it. 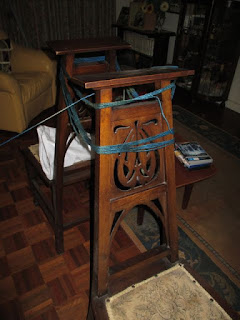 However, I have discovered that not only are the chairs beautiful, they are useful. The backs widen as they get closer to the seat, so they are perfect for putting the wool around them so that it doesn't slide down as I unwind the skeins to make balls of wool.
Posted by Mary at 23.7.15 No comments:

The online group that I am a member of has a yearly exhibition. This year's theme is My Place.
The tapestries have travelled safely around Australia and New Zealand and came to Victoria this month. They are on display at the Handweavers and Spinners Guild in North Carlton, until July 25th, when they will be taken down.

Unfortunately, three of them have gone missing!

We are all very upset, naturally, and are hoping that someone out there in the larger world might notice them - not that we can think where they might go.  But we live in hope that they can be returned to the guild, no questions asked.

If you do see them, please let the guild know, or, if possible, have them sent back to the guild. The tapestries were not for sale, they are private pieces belonging to members of the group. 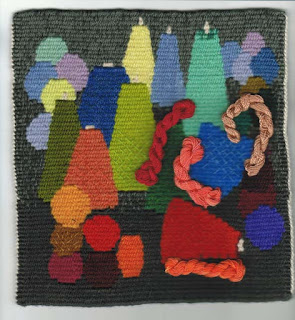 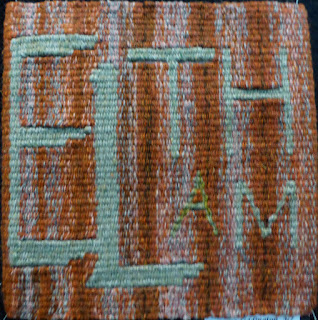 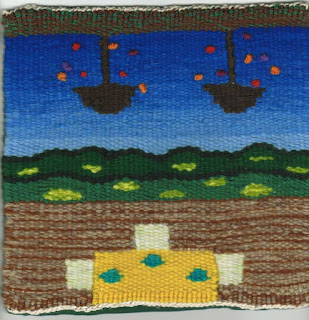 Feel free to download the images to put onto other social media to spread the word.

I have posted about the tree outside our place a few times, I think.
Yesterday I took some more photos, about 10 minutes apart, because the light was changing and the tree looked great. It ranged from white to orange to pink. 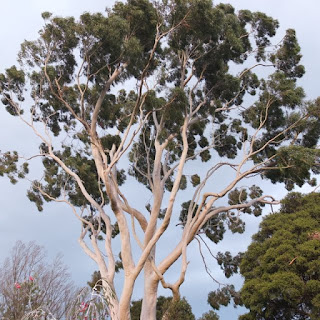 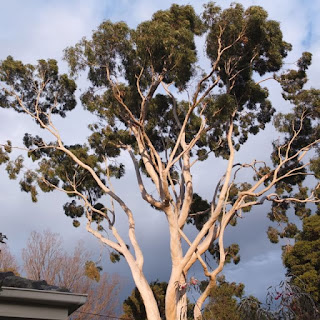 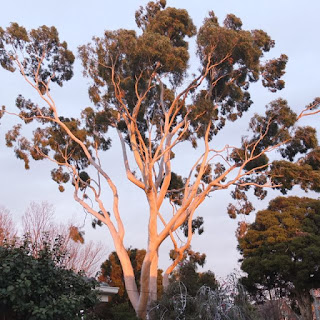 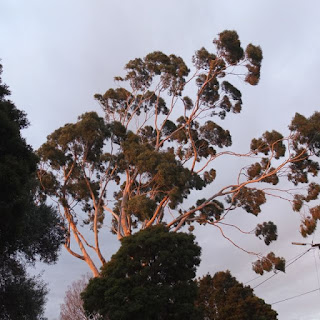 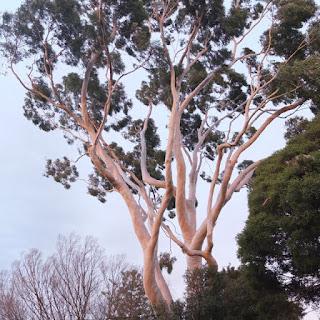 Then I took a few more in the middle of the day today, just when the outside light seemed to be very white. It has been overcast all day, lots of bad weather predicted, and the tree looked great against the dark sky. 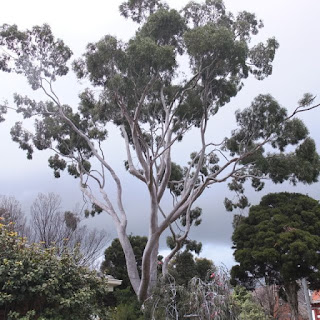 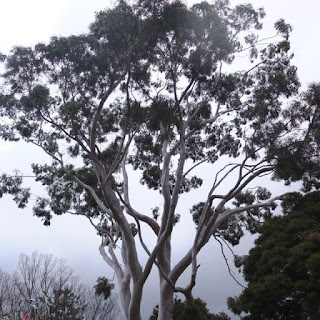 It was odd that the tree looked darkest in the middle of the day while the more glowing photos were taken just before sunset.

I checked the times in the information that comes with the photos and they are an hour wrong, I have no idea why, we are not in daylight saving at the moment. Strange but true.
Posted by Mary at 11.7.15 No comments:

Still trying to come up with ideas

We have had the last class for out design course and now it is time to be working on exhibition pieces. The work all has to be handed in on August 2nd and then there will be an exhibition in September.

Recently, I have been playing around with ideas for artist books. (It was one of the homework tasks.)
I meet monthly with a couple of friends and we were throwing around ideas last month. One thing that has stuck in my mind is the title Booked.
I have taken that idea and done some brainstorming, then decided to make a folded book, based on a design I found in Cover to Cover.  There are a whole lot of patterns that are based on folding your paper (it is for making paper books) and then cutting in various ways. The patterns in the book seem to be for A4 paper, or portrait orientation, but I thought I would like to try to use a square pattern.

I played around with some paper variations and then worked out how the words would be most easily read when the book was made. Then I made a paper copy of the size I wanted and wrote the words.
I had previously made a book using silk, then another with silk organza (I don't seem to have posted about it) and decided to try that again. Initially, I traced it all onto soluble fabric, then realised that I didn't use it last time, I just drew it straight onto the organza and then sewed onto it too. That way there will be no rinsing, which might affect the stiffness of the organza. And there is no reversing of the text, much easier!
I had used the silk organza in the hopes that the stiffness of the fabric would help the book stand up.

After many hours of sewing, and making up the patterns for each section as I went, it is done. 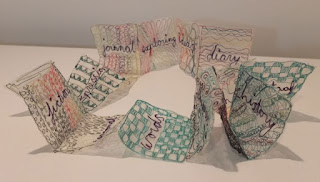 The sewing is still heavily influenced by my doodling but I also wrote down for each section what I had been thinking as I chose the colours and patterns. 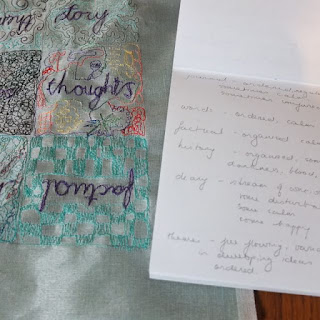 For such a small book, it is a lot of thinking. If I were to do an artist's statement, it could read like an essay. But it did help me decide on what to do. The work can , most likely, be interpreted better without all the notes but they were useful at the time and can go in my folder.
Posted by Mary at 8.7.15 No comments:

What a difference a frame makes!

I had done a piece of free motion embroidery that I decided didn't suit my purpose. It was not terrible, it just didn't fit with the other work I had intended it to sit with. 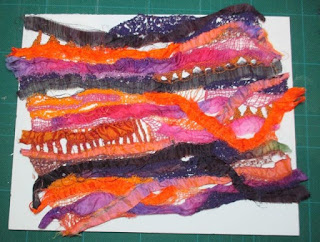 I took it to class last time and there were some ideas thrown around (why I love going to classes), relating to making it 3Dish.  I haven't followed up on these, I had an interesting accident happen that meant I could use the original work as is.

I had some frames ready for a different embroidery and happened to lay down one on the embroidery that I wasn't totally happy with - lo and behold, it made it look much better. So, of course, I played around with how to align it. 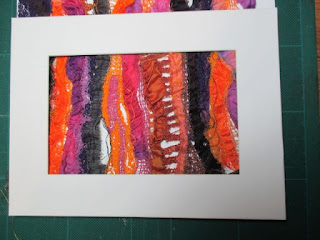 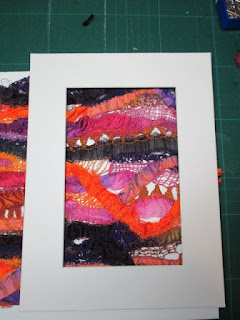 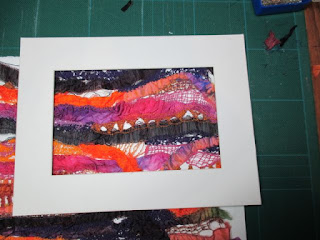 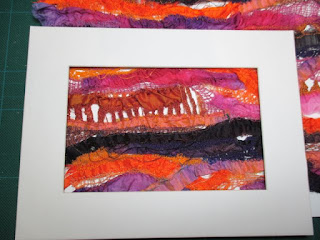 I cut the larger piece in two and it made two embroideries. 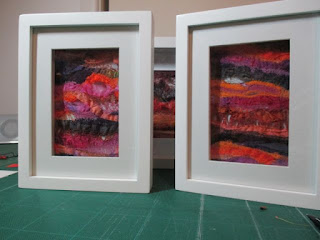 Another embroidery that I was playing around with turned out to be too big for the frame I had in mind. So I had put it aside. I then decided to see how an even smaller frame would look, hiding some of the edges of the work. I like it! 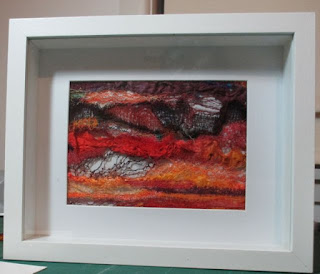 So now it is framed and ready to go.