I haven't done the more frequent posts yet, will keep trying.
I went to the Bendigo Wool Show last week and saw some lovely pieces. Bought a few things too but not too much as I am not that into felting or knitting as much lately.

Then I went to the Quilt and Craft show on Thursday. There was a great quilt show - I think some of them were at the AQC earlier this year but, as I didn't get there, I was pleased to be able to see them this time.

I felt quite inspired at the show, I saw quite a few different techniques that looked interesting and effective. Now to see if the inspiration lasts. 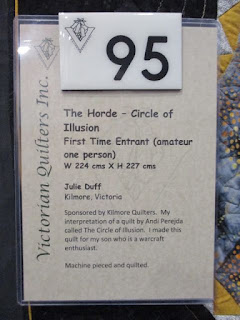 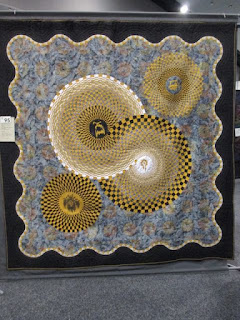 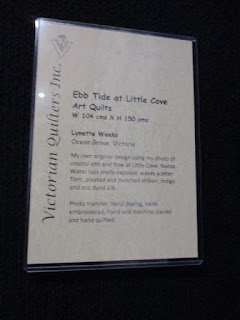 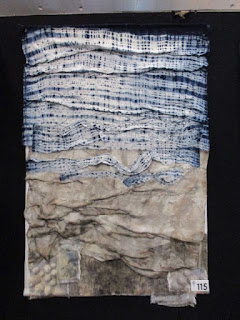 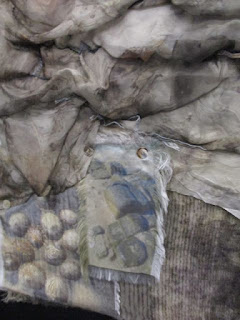 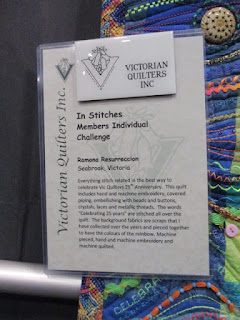 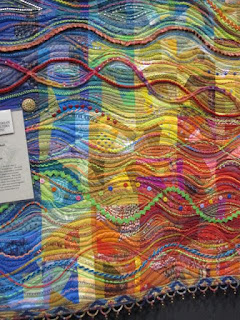 I have finished the tapestry and have even sewn in the ends and put a backing on. Yay! 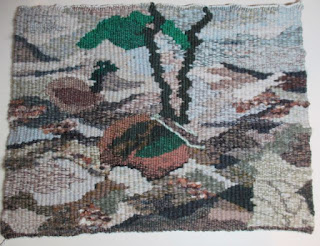 Actually, this has been done for a week or more, I just haven't done anything with it since then.

I have been working on several ideas lately, mostly in my head. One is for the upcoming exhibition at the Embroiderers Guild, Victoria, with the theme Art Deco Now!

One is to lead a Play Day group at the guild, making folded fabric books. I have not done that for ages and am trying to work out how to make them so they can have some texture but still fold.

I wanted to see how I had done something (the folded books) and the best place to find it was ... here, in this blog. I know I started it to be a visual diary (and to learn how to blog - so long ago!). I have dropped off lately. I used to try to post at least once a week. Now I am being productive if it is once a month.

Facebook and closed groups there have sidetracked me a bit. There is a lot of sharing of ideas, prompting new ideas, techniques, challenges, etc. So I have been distracted by that. And then you get even more distracted looking at stuff you had no intention of knowing about. Or wanting to know about.

So I think I will try to be a bit more self-focussed (in a good way) and start blogging a bit more often - really just as a visual diary.

I have this tendency to try various things and then forget how I did it, once I have moved on to something new. I also try to meld ideas from various workshops, books, discussions, etc and need to keep a record that is easy to find. I do have folders with examples, but it is cumbersome to find them, locate the exact bits you want and then see what use it might be. Here, you can put in a search and, if you have put in useful labels, it comes up rather quickly.

On the other hand, going through the old folders can be great - you come across things you had totally forgotten you had played with and get re-inspired.

Onto the current project. Actually, it is one of several things that are occupying my mind at present but I will try to just do this one.

One of my Facebook groups has set a challenge to come up with 4 more textile art pieces in the coming 12 months. The first one was due this month. Not sure of the date and it really doesn't matter as it is not for any deadline other than an arbitrary one.

The 4 pieces are to be 12"x12".
The overall theme is Micro/Macro.
Not sure how I will interpret this and expect things to change over 12 months.
The first one is to be rather monochromatic - approximately 80% the colour and shades of, the other 20% to be another colour.
I have photos that I have played with and played with and then not used, of the hollyhocks in the back yard.
One of the photos is of a close-up of the flower. That is my macro (or is it micro? It may depend on whether you are talking cameras or not). 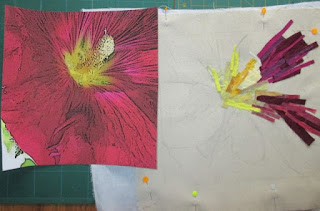 I am going to stick with my current technique derived from Kathryn Harmer Fox's workshop in 2017.

So I have lightly outlined the image and then covered it with little bits of fabric. Due to my recent work with being Inspired By Van Gogh, I am tending to use that technique that replicates the brush strokes. This has caused some of the pieces to be very small indeed. But I have managed to roughly sew them all so that they are attached, even if some of them are barely attached. 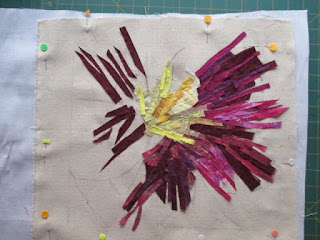 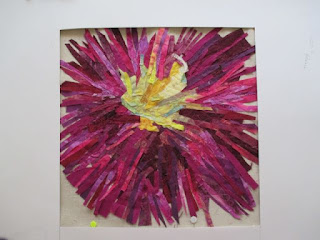 I have put a frame with a 12" hole over it, to give me an idea of where the edges might be.
I liked the raw edge effect of my other Van Gogh pieces, so will try to do that. I think.

The next step will be to decide how to sew the fabric in, how to make it look more like I envisaged, more a part of the overall fabric.
Posted by Mary at 13.7.18 No comments: