I have had to rinse out some of the ice-flower dyeing that I had soaking. I had turned some jars upside down to make sure that the top piece of the fabric wasn't too much paler than the rest, seeing it tends to float and not be as immersed as I would like. But the lid of the container had a slow leak and it was only half full when I looked later.
As I am trying various ways of doing the dyeing, I decided to rinse out both jars of the one method, even though only one jar was leaking. This lot is from the flowers that had been frozen for a year or so and mulberries that had been frozen for a month or so. I had let them thaw out by accident as I had removed them from the freezer and left them too long in a cooler.

It has turned out quite well. The oxalis flowers have given a lovely yellow. I hadn't collected that many of them and was quite pleased with how they turned out. (I will have to help with the weeding again when they flower next year. They are a terrible pest in the garden.) 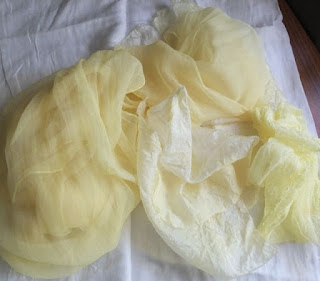 I had soaked the silk in an alum solution before immersing it in the dyebaths.

The frozen mulberries have come out a little more purple than my previous dyeing with mulberries but that is probably due to the alum in the silk. I had also decided to leave the muslin bag full of mulberries at the bottom of the jar, just to see if contact with the actual berries gave a different amount of dye. It has caused darker patches on the chiffon scarf.

The chiffon scarves took up colour much more strongly than the pongee silk pieces.

The instructions for the process (in Eco Colour) say to put the plant material in muslin and squeeze the liquid out after it has been immersed in warm water.  Now I have some lovely pieces of coloured muslin.  I am not sure if they will be colourfast as they were not mordanted.  But maybe some alum was in the solution after the silk was added.  The muslin turned out darker than the pongee silk also (and much more purple with the mulberries).

I will have to think about what I might do with the muslin.  Perhaps I could tear it into strips and weave with it or use if for felting or embroidery. It will go into my scraps box for now.
Posted by Mary at 27.12.12