I've been told that I have to post today because it is 18/2/18.
It has been a while since my last post, I am being sucked in by Facebook. I belong to three closed groups that take up a lot of my computer time. (That, and playing games.)

One group has a challenge for February, to post every day (eek) and to have a sketch or experiment in textiles. That is a big ask. But it has made me do some rough sketches and is also making me work on several ideas that are coming up. 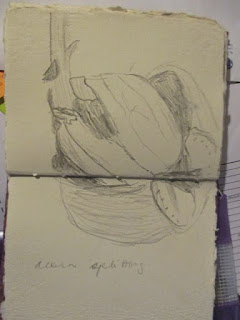 I have done a small tapestry for an upcoming exhibition - and I have lost it!! Hugely annoying!!!
It took hours to sew in the warps, put fabric on the back and finish it off - hours. 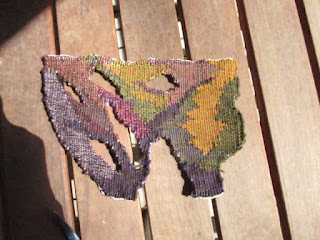 I am also trying to develop an idea for another tapestry theme and spent the weekend working on a sampler. It may now become my piece to replace the other (much more interesting) piece. The theme for the lost one is Growth. The theme for the upcoming one is Transformation.

My idea for transformation is to do with acorns splitting open and having shoots and roots emerging.
I did a small doodle related to the theme - one of my nightly little doodles. 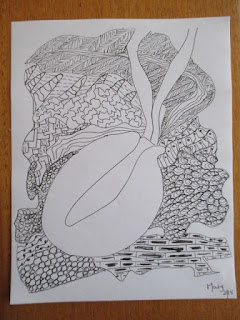 Now I have made a sampler with that doodle as my main image. I was more interested in the background than getting a great image, which was lucky as it looks rather like a strange rabbit. 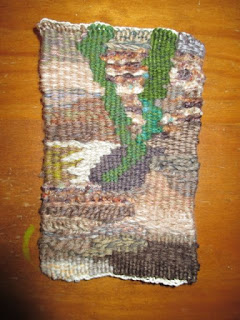 But I think I can use the ideas in the background in my larger one, so that is a plus. I used different techniques and yarns to give me texture. I had a whole lot of thrums left over, so only used them. It made it quite a random background in terms of colour and how large the areas were. I just changed to some more wool when the pieces ran out.
Posted by Mary at 18.2.18 2 comments:

Unfinished Business ... Finished opened on Wednesday evening. It was a hot night and there were lots of people there!
I think that the crowd was large because it was two groups of people exhibiting together. There were the textile people (Textile Art Community) and the woodworking group (Victorian Woodworkers Association).
Then there were the donors whose work was repurposed.
Then there were family and friends.
And supporters of the arts in Banyule.

It was quite amazing to see how some of the original pieces were used. Some were still quite recognisable (mine) and some had totally re-visioned the pieces.
I deliberately decided to make my two vessels recognisable because the donors had had to stop making because of failing eyesight. So I wanted them to be able to recognise their pieces if they attend.

It was great fun to be there, to meet up with friends, to meet people from the very distant past (it being in my neighbourhood and a city function) and to meet new people. It was a community event that highlighted 'community' for me.

It was also very exciting to see some of my donated pieces being used. I am extremely pleased to see them so creatively used. 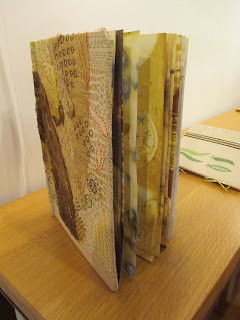 My machine embroidery group, at the Embroiderers Guild, Victoria, has come up with a new theme this year. It is still Inspired By ... but this year the theme is song and music titles.

This last month was Rhapsody in Blue.
I had absolutely no idea what I wanted to do. However, late last year I was at the fabric shop and did see small pieces of fabric that reminded me of music and sound recordings - and they were blue.

Our meeting was on Sunday. On Saturday I decided that I could come up with something if I didn't stress too much about how wonderful it would be.

So here is my Rhapsody in Blue. 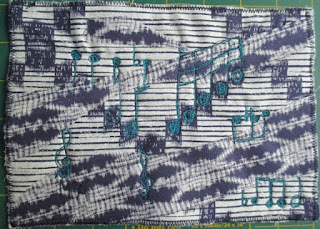 I used the notes from the score, not that you would necessarily know that.
Once again, the size is A5, which suited me down to the ground this time.

This time, I am working towards the online group's Inspired By ... theme. We have set ourselves the challenge to make 4 pieces in a year. It isn't a calendar or financial year, just an arbitrary year. We are up to number 3. (Here are 1 and 2.)

I am sticking with Van Gogh and Kathryn Harmer Fox.
The Van Gogh influence is the choice of subject, a sunflower. It is seen from the side, which I don't think he did. But I am still influenced by him.

Part of the reason for the sunflowers is that we have been growing them in the backyard and we put thm in a spot that was off the ground and just outside the back door. They were perfectly situated for me to take close up photos, albeit not front on.

I chose one when it was opening up and pointing east. 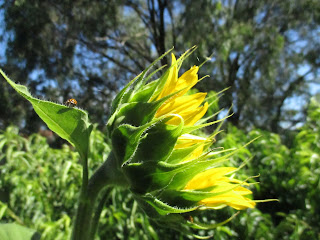 The Kathryn Harmer Fox influence if from the workshop I did last April. I have also done my other two for this challenge in the same technique. One more to go.

It starts off looking relatively easy, then the making adjustments, shading, corrections, etc, comes in and there is a lot of sewing. But it is a very enjoyable technique that is also a bit forgiving. 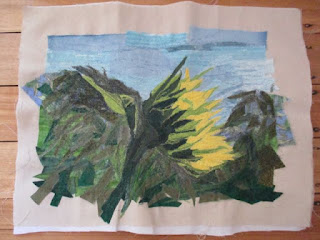 Today I have spent a few hours mounting it onto foamcore. 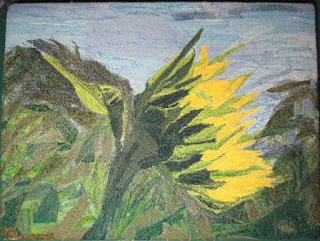 I decided to leave off the ladybird because I had a bit of trouble with the background and it is now very thick and I thought I might just mess it up.

Now I have three of them, all the same size. Once I have made the next one, I will have to think about how I am going to frame and hang them. But that must be 3 months away, which may not be that far away, actually.